The point of all this is to infect the minds of the population and transform people into what the government calls "normal." From the government's point of view, of course, "normal" means "obedient and mindless."

This is all described in a video and a document that surfaced several years ago but which are only now beginning to connect the dots as the medical police state in America accelerates to insane levels of aggression against the population. See recent stories on medical kidnapping in Arkansas and CPS kidnapping of children in Arizona for starters.

Starting at the 3:00 mark, you can hear this scientist explaining how a vaccine can "turn a fanatic into a normal person." A normal person, of course, means a person who is obedient to government authority.

-As you might suspect, this is also a war against home schooling because the couple's children are all being home schooled. 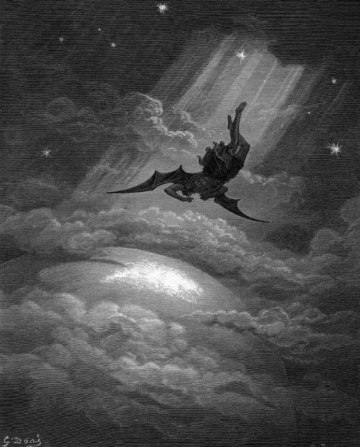 "Satan the fallen angel." by Doré

Psalm 33:10 The LORD bringeth the counsel of the heathen to nought: he maketh the devices of the people of none effect.

Psalm 2:4 But the one who rules in heaven laughs. The Lord scoffs at them.

Psalm 2:18 Behold, the eye of the LORD is upon them that fear him, upon them that hope in his mercy; 19 To deliver their soul from death, and to keep them alive in famine.

Next post: The English South African, His History, Culture and Achievements