"And he causeth all, both small and great, rich and poor, free and bond, to receive a mark in their right hand, or in their foreheads: And that no man might buy or sell, save he that had the mark, or the name of the beast, or the number of his name. Here is wisdom. Let him that hath understanding count the number of the beast: for it is the number of a man; and his number is Six hundred threescore and six."

The biblical Antichrist, the seed of the serpent, Satan incarnate, referred to as the 'beast' in the above passage of scripture, is bound and determined to own this planet and enslave mankind [Isa. 14:12-14; Rev. 13:8]. In so doing, he intends to put a 'mark' of ownership on every single person. This action will be part of his defiant attempt to usurp the final and rightful control of the earth from the Lord and Saviour Jesus Christ and prevent his promised return. The matter will ultimately be settled at the biblically prophesied battle of Armageddon:

"And he gathered them together into a place called in the Hebrew tongue Armageddon." (Rev. 16:16)

And I saw the beast, and the kings of the earth, and their armies, gathered together to make war against him that sat on the horse [the Lord Jesus Christ], and against his army." (Rev. 19:19)

The NT Greek word for 'mark' is charagma (khar'-ag-mah), which by definition means: a scratch or etching, i.e. a stamp (as a badge of servitude). In essence then, the "mark of the beast" carries here the idea of branding people like livestock. That mark, or brand, will identify them as his personal property, his 'possession', for it will have an association of some sort with his name as well as the "number of his name", the 666. It should be understood that those who submit themselves and take this 'mark' will be associating themselves with his rebel cause...it will be a "badge of servitude", a charagma. Essentially this will mean submitting willfully to literally being Satanically possessed.

This concept brings up a very important point, and one which is commonly not understood, which is that this scenario can not occur until 'the beast' first comes to power, and then, at a later point, makes his identity known, claiming to be 'God' himself [2Thes. 2:4]. According to the Word of God, this will not happen until the mid-point of the seven-year period of time described in the bible as the 'tribulation' [Matt. 24:21]. Anything before that point is not the 'mark of the beast'.

1 John 1:9 If we confess our sins, he is faithful and just and will forgive us our sins and purify us from all unrighteousness. 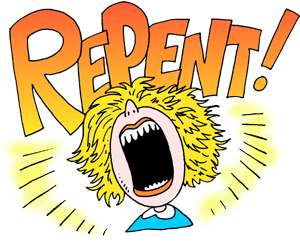 2 Peter 3:9 The Lord is not slow in keeping his promise, as some understand slowness. Instead he is patient with you, not wanting anyone to perish, but everyone to come to repentance.