its' origins and its' purpose 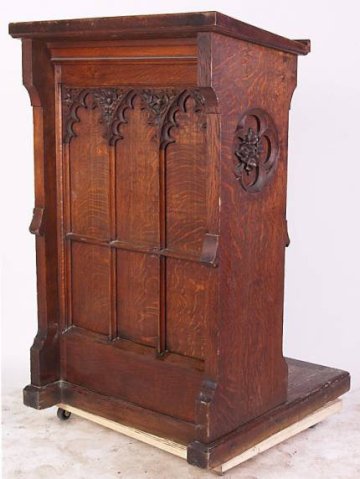 In most European languages the pulpit is still referred to by its original heathen name, "ambo." (Latin: ambon)
The pulpit pre-dates Christianity and is wholly pagan in origin. The heathen priest, standing in a heathen temple, moved out onto a walkway which had a banister around it and made his announcements to the pagan onlookers. This was called the ambo. (The Pope still does this.)
Those first Christian church buildings followed this heathen practice, putting an ambo inside the building, high upon one of the columns. Centuries later when the Protestants took over northern Europe, those Protestants inherited thousands upon thousands of Catholic church buildings.
The Protestants (Martin Luther in particular) tore out that unapproachable area up front where the priests had conducted their magical mass. Not stopping there, they literally ripped the ambo off the church column and placed it up front in the center.
So was born the Protestant pulpit.
The word pulpit came to us from the Latin "pulpium." It originally meant a scaffold or platform. Even today the harpoonist, who stands way out on the front end of a whaling ship, stands on a pulpit.
What is the purpose of a pulpit today?  No, it's not so that a "preacher" can have a place to prop his notes and lay his bible.
A pulpit is used today to make the person standing behind it feel really Big and really Important.
A pulpit is used today to purposely impress you and to awe you, the humble pew-sitter.
A pulpit is used today to keep you from asking questions; and from falling asleep.
A pulpit is used today to keep you, the lowly, second-class Christian apart from those first-class, full-timers up front.
Its very presence is intimidating to dialogue, communication, and sharing.
The pulpit strongly encourages "showmanship" on the part of its occupant.  Remember, part of the definition of a pulpit is "a stage."
The Apostle Paul said, "We preach not ourselves, but Christ Jesus the Lord, and ourselves your servants for Jesus' sake."  Evidently, it must be easy for a person to preach himself instead of Christ.  It seems that the modern pulpit makes this even easier to do.  Being a place for public oratory, the pulpit practically demands that those who enter its precincts bring forth a sermon type speech in the style suitable for a public show. This is what is expected.