A Biblical perspective of UFO's, Aliens and Alien Abductions

The demonic connection to this phenomenon

When secular experts like those featured in the National Geographic's "Chasing UFOs" and the History Channel's "Ancient Aliens" series examine alleged UFO and alien contact incidents, they almost always do it from a purely scientific perspective.  Looking for scientific explanations is a useful and necessary step that should always be taken.  Science can often help investigators determine if it was a hoax, or if there are other logical, natural explanations for what was seen and/or heard.  However, there are several reasons to be suspicious that at least some UFO and USO sightings and alleged alien contacts may be beyond the reach of scientific inquiry because they are spiritual in nature. Others may actually involve advanced technologies, but not from aliens from other planets.  In both cases, they have their roots directly or indirectly in the demonic realm and their ultimate goal is to deceive us and cause us great spiritual harm.

Some modern day examples (other than UFO's and aliens) of large groups of people being deceived by demons showing great "signs and wonders" (as the Bible refers to them), include:

Our position on UFOs and "aliens"

Our position on this is pretty straightforward.

Most UFO sightings can be explained either as mistaken identities of something else, or as hoaxes perpetrated by people.  However, there is a smaller percentage of UFO and USO's (unidentified submerged objects), around 5%, that can be divided into these categories:


real craft not of human origin, but not from "aliens" either

For excellent examples of testimony by what appear to be mostly highly credible witnesses, watch these videos of witnesses uncovered by the U.F.O. Disclosure Project in front of audiences of international journalists at the National Press Club. Warning - there's a lot of left leaning propaganda during the the introductions and from some of the witnesses in some of the presentations at the National Press Club  that I am in no way endorsing.  The reason for putting a link to these videos on this page is because they provide one of the best opportunities I've seen so far to watch what appear to be highly credible witnesses (most of them) give their testimonies first hand. Keep in mind that these witnesses are all testifying in front of members of the National Press Club (www.press.org/about), an organization of professional journalists.  They are an audience that has the knowledge and know how to verify at least some of what they are saying, including whether or not they are really who they say they are.  The "I know what I saw" documentary, especially the Mercury astronaut who was an eye witness to a UFO that touched down on a military base right in plain view of him and several others on the base is also very compelling.

THE AUTHOR SAYS: "..the church needs to quit ignoring this issue and get much more active in warning and educating people about it." YES, I AGREE!

There were giants in the earth in those days; and also after that, when the sons of God came in unto the daughters of men, and they bare [children] to them, the same [became] mighty men which [were] of old, men of renown. Genesis 6:4 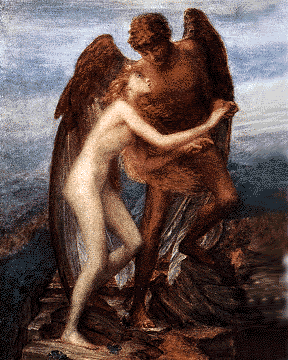 Like the author of the article - I also have a relative involved in this UFO cult for many years.

She also thinks the demons have good intentions and want to talk to them.

And whatever I say about Jesus she does not believe me. Tragic!

Yes, it is always a distraction away from saving knowledge of Jesus Christ, and to attempt to destroy the credibility of the Bible.

(It seems as if the author of the article believe in "pretrib rapture". I do not endorse that!!

The author also endorse Chuck Missler, who I don´t endorse!)

Next post: Communism and Feminism Created by The Jews & Testimony by a Chinese ~Video