The hurricane came and went without any harm to us. But the one within me continued to gather force. It seemed strange, from my point of view, for all the people around me seemed calm. Even the doctor was no longer speaking much to me about the Lord, for I wasn't seeing him regularly. Bonnie was quietly supportive, but we really didn't say much about it. Mike and my other friends went on with life. It was "business as usual" around me, but definitely not that way inside of me.

Easter was approaching and one quiet morning I was at home recuperating from the second operation when the doorbell rang. It was a special delivery letter from the Supreme Council in Washington, notifying me that I had been selected for the 33rd Degree.

I could hardly believe it was true! This honor is one most Masons never even think of receiving. It was too much, too far out of reach, beyond limits of reality. It was unreal to think I had actually been selected. It was an honor just to be considered for this ultimate degree and I had actually been selected, chosen by that small and powerful group, the Supreme Council of the 33rd Degree.

So I returned my acceptance immediately and began making plans for the trip.

I MADE IT ON MY OWN

With plenty of time to reflect, I thought about my long climb up the mountain of Masonry in search of light. I thought about the odds against anyone's ever making it to the 33rd Degree. I realized that in my case the odds have been even greater. I had made it by hard work and dedication alone. Some men have an edge on selection because of their wealth, political power or prominence. I had none of these.

Like the day I had carried the man all the way to the top of "Shaw Hill" between Camp Butner and Raleigh, I had made it to the top of the Masonic mountain because I was willing to make the effort required and refused to quit. Thinking of this, I felt particularly good about it and wished my mother could know.

I had come a long way since leaving the front gate that terrible day so many years ago. I had come the distance with no help from Uncle Irvin. Who would have thought that the lonely walk, begun so many years ago by that frightened 13-year-old boy, would have led to this point? I had reached the pinnacle - made it all the way to the top.

Some of the most prominent and influential men in the world would undoubtedly be there to participate when I was given this ultimate degree - for me - little Jimmy Shaw, who had gone to work at age five and made it alone since age 13. They would be there to give the 33rd Degree to me. It was really a bit difficult to take it all in.

3 DAYS AT THE MOUNTAIN TOP

In order to receive the 33rd Degree it was necessary to go to Washington. D.C. The initiation and related functions were to last three days.

Since Bonnie could participate in practically none of the things I would be doing each day, she decided not to go along. We were both excited as I made preparations to leave. But I was not as excited as I expected to be. The edge was taken off the excitement because, in me, it was mixed with a considerable amount of conviction. Way down deep there was a growing restlessness, an increasing conflict, produced by the things the doctor had been sharing and by all the Scripture I had been reading. Preparing to receive this "ultimate honor" was not as thrilling as it might otherwise have been.

- There were some extremely prominent men there that day, including a Scandinavian King, (my emph,) 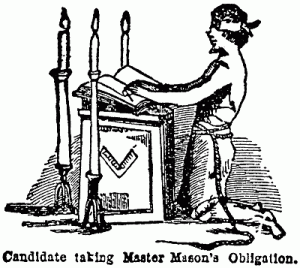 The goal of the Jewish Masonic elite is to establish dictatorial Illuministic Communism and to enslave all of mankind under the thumb of a Jewish master race led by a world messiah who is to rule from Jerusalem. Read more

"Freemasonry is a Jewish establishment, whose history, grades, official appointments, passwords, and explanations are Jewish from beginning to end."----Rabbi Isaac Wise

The Jewish Tribune of New York, on October 28, 1927, stated; "Masonry is based on Judaism. Eliminate the teachings of Judaism from the Masonic Ritual and what is left?"

This film by Jüri Lina tells about the history and origins of Freemasonry and why their god is Jahbulon. It also details their bohemian grove and freemasonic rituals.