ARE JEWS STILL GUILTY FOR THE CRUCIFIXION?

(Answer: Jews today are guilty only if they support those leaders of Judaism who had Christ crucified.)

Scripture teaches no one is guilty for the sins of another. We all enter the world innocent of the misdeeds of our parents. This includes every Jewish child.

Yet the Bible also teaches we can become guilty of the sin of another by sympathy with it. Christ said the Pharisees were guilty of the murder of Abel and all righteous blood from the beginning of the world. (Mat. 23:35) Why? Because the Pharisees persecuted righteousness. Had they been present in the time of Abel, they would have murdered Abel. Thus, according to Christ, it is possible to become spiritually guilty of a sin, such as murder or adultery, even without physically committing the act. The will is there. All that is lacking is the opportunity.

Modern or rabbinic Judaism is a product of those very Pharisees whom Christ excoriated, and who ultimately had Him crucified. The authoritative Universal Jewish Encyclopedia explains:

"The Jewish religion as it is today traces its descent without a break through all the centuries from the Pharisees. Their leading ideas and methods found expression in a literature of enormous extent, of which a great deal is still in existence.. The Talmud is the largest and most important single piece of that literature.." The Universal Jewish Encyclopedia, Article on "Pharisaism," p. 474 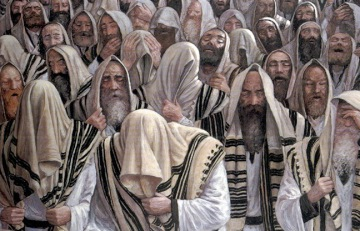