An Eye for an Eye: The Story of Jews Who Sought Revenge for the Holocaust

Did vengeful Jews take over concentration camps at the end of World War II, then arrest and herd innocent Germans inside these camps, torturing and murdering thousands? In his thoughtful, yet mind-splitting book, An Eye For An Eye, John Sack fully documents the answer.

Yes, regrettably and sadly, it is a fact that, empowered by the victorious Allies, some Jews were given vast authority to populate the concentration camps with German victims. In all, 1,255 camps were run by Jewish Commandants. German men, women, children, and babies (yes—babies!) were starved, beaten, whipped, tortured, and murdered by Jewish officers and guards.

Author John Sack is himself a Jew. That is why he was so horrified over his shocking discoveries. Since his book came out, both TV’s 60 Minutes and The New York Times newspaper have independently corroborated what Sack reported. The New York Daily News wrote: "The events are vivid, the language is powerful, the conclusions appear just."

Following the book’s publication, Lt. Schlomo Morel, the man Sack exposed as possibly the most vicious and barbaric of the Jewish Commandants, was indicted by Polish authorities for crimes against humanity and for the extermination of innocent people. Morel promptly fled his native Poland and now is living in Tel Aviv, Israel, shielded and protected there by Jewish authorities who refuse to turn him over for trial.

Meanwhile, John Sack’s book—which we offer this month and highly recommend—has sparked a furious controversy. Influential Jewish organizations are doing their utmost to kill it. The media generally refuse to admit these things ever happened, and one magazine calls An Eye For An Eye, "The book they dare not review."

Sack, a highly respected journalist for over 50 years and a former special correspondent for CBS News, refuses to bow under pressure. He recently told Texe Marrs, "Only by way of the truth can Jews find redemption." source

The Book They Can't Suppress

Not for sixty years has a book been so brutally (and, in the end, unsuccessfully) suppressed as An Eye for an Eye. One major newspaper, one major magazine, and three major publishers paid $40,000 for it but were scared off. One printed 6,000 books, then pulped them.

Two dozen publishers read An Eye for an Eye and praised it. "Shocking, "Startling," "Astonishing," "Mesmerizing," "Extraordinary," they wrote to Author John Sack. "I was rivited," "I was bowled over," "I love it," they wrote, but all two dozen rejected it.

Finally, BasicBooks published An Eye for an Eye. It "sparked a furious controversy," said Newsweek. It became a best-seller in Europe but was so shunned in America that it also became, in the words of New York Magazine, "The Book They Dare Not Review."

Since then, both 60 Minutes and The New York Times have corroborated what Sack wrote: that at the end of World War II, thousands of Jews sought revenge for the Holocaust. They set up 1,255 concentration camps for German civilians -- German men, women, children and babies. There they beat, whipped, tortured and murdered the Germans.

Long unavailable, An Eye for an Eye is back in a new, revised, updated and illustrated edition. Submitted by the publisher, John Sack

Eye for an Eye by John Sack 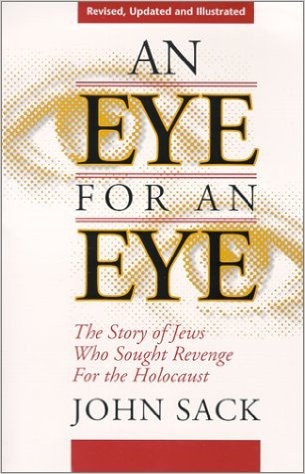 The worst thing that happened to some Holocaust survivors was that they became like Nazis. How and why - and why they stopped - is the subject of this book. It is a story of Jewish revenge - and Jewish redemption. An Eye for an Eye is a riveting account of the appalling events that accompanied the end of World War II. In 1945 the Soviet Union, which occupied Poland and parts of Germany, a region inhabited by ten million German civilians, established the Office of State Security and deliberately recruited survivors of the Holocaust to carry out a policy of de-Nazification. The Office entered German homes and rounded up German men, women, and children - 99 percent of them noncombatant, innocent civilians - and took them to cellars, prisons, and 1,255 concentration camps, where inmates subsisted on starvation rations, where typhus ran rampant, and where torture was common-place. In this brief period, between 60,000 and 80,000 Germans died in the Office's custody. The book tells the story of what drove people

...Two years before the book version of Company C was released Sack published what is arguably his most controversial book, An Eye for an Eye (1993). In fact, its subject was so politically and emotionally sensitive that seven years elapsed from the project's inception to the point that a publisher, Basic Books, would print it. In An Eye for an Eye Sack reports that at the end of World War II between sixty thousand and eighty thousand German civilians, including women and children, died in Polish prisons and concentration camps that were run by Jews.

Sack first began working on the story following a 1986 meeting with Paramount Pictures producer Lynda Obst to discuss a movie deal for the writer's story on the Billionaire Boys Club. At the meeting Obst's secretary told Sack that her mother had been an inmate at Auschwitz during the war and, at its end, had been put in command of a Polish prison filled with former members of the German SS. Over the next two years, Sack interviewed the mother, Lola Potok Blatt,  and others with knowledge of the prison. California published the story, "Lola's Revenge," which had previously been rejected by ten magazines, including Esquire, Rolling Stone and The New Yorker, as its lead in the May 1988 issue. Lola, as Sack refers to her in the story, helped promote it on National Public Radio, flying at her own expense to Washington, D.C. The article was included in Best Magazine Articles: 1988 (1989, edited by Thomas Fensch).

However, problems began to mount when Sack started to expand the story for book publication. His agent at the time refused to represent it, as did five others before Sack signed with the Ellen Levine Agency in New York. Of the 12 publishers approached with the book proposal, only Henry Holt accepted it. But then Lola, who had earlier asked Sack to write the book, said she no longer supported it and threatened legal measures to halt it. Sack said he had to spend several thousand dollars on legal fees before he could continue. In February 1990 Holt canceled the book following the death of Don Hutter, Sack's editor. Sack, who had already spent two years on research, including interviews with more than two hundred people and trips to seven countries (several visited more than once), then went $100,000 in debt while doing the project on his own.

Quote from the book: "It's really that we're living in times that are so politically correct that just to report the truth becomes controversial

This subject is not political correct - that is why you cannot click "read more" as it is removed!