An Eye for an Eye: The Story of Jews Who Sought Revenge for the Holocaust 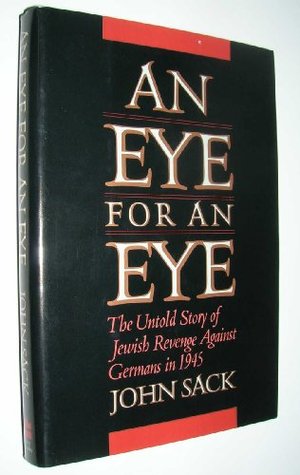 Book Description Publication Date: October 1993 The Book They Can't Suppress Not for sixty years has a book been so brutally (and, in the end, unsuccessfully) suppressed as An Eye for an Eye. One major newspaper, one major magazine, and three major publishers paid $40,000 for it but were scared off. One printed 6,000 books, then pulped them. Two dozen publishers read An Eye for an Eye and praised it. "Shocking, "Startling," "Astonishing," "Mesmerizing," "Extraordinary," they wrote to Author John Sack. "I was rivited," "I was bowled over," "I love it," they wrote, but all two dozen rejected it. Finally, BasicBooks published An Eye for an Eye. It "sparked a furious controversy," said Newsweek. It became a best-seller in Europe but was so shunned in America that it also became, in the words of New York Magazine, "The Book They Dare Not Review." Since then, both 60 Minutes and The New York Times have corroborated what Sack wrote: that at the end of World War II, thousands of Jews sought revenge for the Holocaust. They set up 1,255 concentration camps for German civilians -- German men, women, children and babies. There they beat, whipped, tortured and murdered the Germans. Long unavailable, An Eye for an Eye is back in a new, revised, updated and illustrated edition. Submitted by the publisher, John Sack