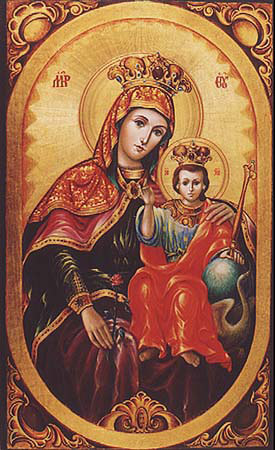 "A reference to the "queen of heaven" appears twice in the Book of Jeremiah. Who or what is this Queen of Heaven?

The first occurrence is found in Jeremiah 7:18. It reads, "The children gather wood, the fathers kindle fire, and the women knead dough, to make cakes for the queen of heaven. And they pour out drink offerings to other gods, to provoke me to anger." This Queen of Heaven was clearly a foreign god that some Israelites worshiped and angered the Lord in the process.

The second occurrence is found in Jeremiah 44:17-25 where the phrase is used multiple times. The Jewish men who answered Jeremiah said in verse 17, "But we will do everything that we have vowed, make offerings to the queen of heaven and pour out drink offerings to her, as we did, both we and our fathers, our kings and our officials, in the cities of Judah and in the streets of Jerusalem. For then we had plenty of food, and prospered, and saw no disaster." Again, the Queen of Heaven was a foreign god the Israelites worshiped in direct opposition to God's laws.

What is the identity of this Queen of Heaven? The reference was to an Assyrian and Babylonian goddess called Ishtar (also called Ashtoreth or Astarte). In their system of gods and goddesses, Ishtar was believed to be the wife of the false god called Baal or Molech. As the wife of the chief male deity in these pagan-worshiping cultures, Ishtar became known by the name Queen of Heaven."

"The historical Patrick came to Ireland in the year 405. In his Testimony, he tells us, “I was taken captive before I knew what I should desire and what I should shun.” It was during the time of his captivity that he turned from his careless ways and came to a saving knowledge of Christ Jesus. He was convicted that he was a sinner. In his own words, “Before I was humbled I was like a stone lying in deep mire, and He that is mighty came and in His mercy raised me up and, indeed, lifted me high up and placed me on top of the wall. And from there I ought to shout out in gratitude to the Lord for His great favors in this world and for ever, that the mind of man cannot measure.”