Is this the Ravi Zacharias who is behind Agape Sweden! DefCon has chronicled Ravi Zacharias’ downfall beginning with his first public compromise when he accepted an invitation to speak at the LDS temple in Salt Lake City but failed to make any distinction between the true Jesus Christ of the Bible and the demonically inspired false Christ of Mormonism. See Ravi Zacharias fails to preach the Gospel to the Mormons.

We then examined his further compromise in Ravi’s Descent where he accepted the condition to not pray in Jesus’ name at the National Day of Prayer coordinated by NDP chairwoman Shirley Dobson, wife of James Dobson of Focus on the Family which recently promoted the cult of Mormonism. Beginning to see the big picture yet?

Then we examined Ravi’s Crash and Burn as he not only accepted an invitation to speak at rank heretic Robert Schuller’s New Age ReThink conference, but that Ravi Zacharias also spoke favorably of Roman Catholic mystic Henri Nouwen, calling him “one of the greatest saints in recent memory.” (alertswedens betoning) 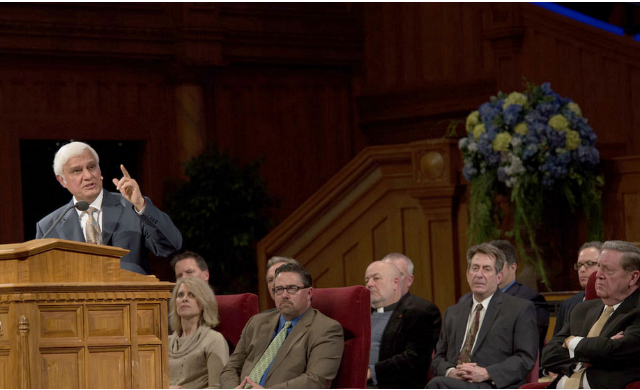 Christian apologist and writer Ravi Zacharias addressed 3,500 evangelicals and Mormons at the LDS Tabernacle in Salt Lake City, Utah, asking that people from the two faiths stand together to oppose "relativism" and "lost morality."

My name is Rauni Higley and I am a former Mormon, as is my husband, who comes from six generations of active Mormons. I am very troubled by your up-coming visit to speak in the Mormon Tabernacle in November. Let me explain why:

I was a convert to Mormonism in Finland where I also served my LDS mission before coming to Utah. I was hired by the LDS Church upon my arrival here to work for them as a full-time translator and interpreter for Finnish language, translating their doctrinal teaching materials, including the secret temple ceremony. I worked as a translator for the leaders of the church over 14 years. I know doctrine of the LDS Church well.

I remained an active LDS for 20 years. My husband had served his LDS mission, also in Finland, and after that he had many leadership positions, which included Elder Quorum President, Sunday School teacher and High Councilman. What we lacked was biblical understanding of who God is and who Jesus is. We had accepted the Mormon twist to what the Bible says. We believed, as Mormon Church teaches, that God had not always been God, but that He was a former mortal man from another planet, who’s father-god also was a former mortal from even more distant planet, etc. We believed that God is resurrected, exalted man, and that there are many Gods, even if we are to worship only three Gods. We believed, what all Mormons are taught, that Jesus is an elder spirit-brother of all humans, born to our Heavenly Father and mother(s) in pre-existence, and that angels, including Satan, are Jesus’ and our brothers and sisters. We also believed that Jesus was not begotten by the Holy Ghost, but by this physical, exalted man, God of Mormonism, as Mormon Doctrine, p. 547, says, “ Christ was begotten by an Immortal Father in the same way that mortal men are begotten by their mortal fathers.” We believed that Jesus spoken of in the Bible is the same Jesus taught in the Mormon Church, but that the Christian world does not understand His person and is in the dark about Him, because “they only have the Bible“, that is not correct in all points concerning doctrine. We believed, as we were taught, that only Mormons know the truth about Jesus because Joseph Smith, having been visited by God the Father and His Son, Jesus Christ, had spoken with them, and after that Joseph Smith revealed who God and Jesus really are. Current President, Gordon B. Hinckley, has openly declared that he does not believe in “traditional Jesus“, taught by Christianity, but that he believes in “Jesus who was revealed to Joseph Smith“. We felt sorry for Christian preachers who could speak so eloquently about Jesus, but yet did not know who He is – as we, Mormons, did.

As I said, I have been very troubled by your coming visit to speak in the Mormon Tabernacle, because I am sure that it will be used by the Mormon Church as your endorsement that Mormonism is part of Christianity. I am also absolutely sure that your name will be used in months and even years to come by the LDS Church, and its almost sixty thousand missionaries, to convert more people into Mormonism from Christianity, especially if you also meet with the Mormon Church‘s president and other leaders.

“Yea, they are greedy dogs which can never have enough, and they are shepherds that cannot understand: they all look to their own way, every one for his gain, from his quarter” (Isaiah 56:11).

“And through covetousness shall they with feigned words make merchandise of you: whose judgment now of a long time lingereth not, and their damnation slumbereth not.” (2nd Peter 2:3)

Come Out From Among Them VIDEO

“Evangelical churches will be the chief instrument to bring the New World Order to birth.” Jeremy Rifkin, New Age leader