Beware of Jack Van Impe who is a false Christian!!

Jack Van Impe is President of Jack Van Impe Ministries International. Along with his wife, Rexella, he is the host of the television program 'Jack Van Impe Presents', author of the newsletter Van Impe Intelligence Briefing, and publisher of the prophetic magazine Perhaps Today. He has been called the “walking Bible” having spent about 35,000 hours memorizing over 14,000 Bible scriptures including virtually the entire New Testament. He has a reputation as one of the top Bible prophecy experts in the world.

There is no doubt he can rattle off chapter and verse with the best of them. Unfortunately all his knowledge of scripture has produced precious little discernment in the man that many look to as a master of Bible prophecy.

Van Impe has in recent years come under criticism for his increasingly ecumenical doctrine. He has for example praised the Popes plan for unity among Christians and the establishment of a world church. He has made the false claim that Catholic’s and fundamentalist Christians are in agreement in the basics of doctrine. He continually pleads for Christians to drop their theological “bias” and embrace Catholics as brothers in the faith. Anyone who knows anything about the Catholic catechism knows that it is fundamentally opposed to biblical Christianity.

Can he be anything other than a "controlled opposition" ! 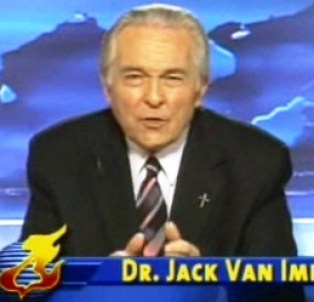 Apprising Ministries is a online apologetics and discernment labor in the Lord and part of my commission as pastor-teacher is to help make you aware of trends within the church visible.

I wish I had better news but as I survey the horizon I see a tsunami of apostasy on the way; in large part because spiritually obtuse leaders within seriously squishy evanjellyfish didn’t fight the neo-liberal cult operating in the Emerging Church, but rather, tragically they would embrace it.

Sadly, spiritual blindness continues to slowly spread across the lukewarm landscape of the visible Christian church—pushed along as it is by 1 Peter 4:17 judgments—leading to a real death of discernment within.

Into this vacuum have come all kinds of deceptions and false prophets, many of whom have been there all the time, eg. the brood of vipers on and associated with the Trnity Broadcasting Network, but were until now relegated to slithering along the shadows at the edge of evangelicalism.

Jude 1:11, “Woe unto them! for they have gone in the way of Cain, and ran greedily after the error of Balaam for reward, and perished in the gainsaying of Core.

Televangelist Jack Van Impe, once upon a time Pastor Jerry Falwell's sidekick and nationally known as a fundamentalist Baptist crusader, says all that is behind him now.

Now that he's discovered the “spiritual riches” that are found only in Roman Catholicism and in the Papacy.

On my new video you'll see Jack Van Impe and his vivacious wife and co-host, Rexella, gush with fulsome praise for the Pope and for Rome's priests. Van Impe exhorts Catholics to obey their black-robed, white-collar spiritual superiors.

"You Catholic people, listen to your priests... Thank God for these Catholic leaders.”

“The Catholic Doctrines Are Right On.”

Jack Van Impe is of course a man of the New World Order-zionist and as such worships the devil (Satan).

I'm pretty sure he was saying the Catholic church was better before the last pope came in, although I don't think it's the best religion, but only a personal relationship with the creator is the best way to go.

The ONLY way: "personal relationship with the creator is the best way to go."

Not the best way - but the ONLY way. There is only one Creator that is Jesus Christ! He died for us on the cross.

Nästa inlägg: America Under the Talmud: Will It Work for US? by Carol A. Valentine