CHARTA OECUMENICA IS FROM THE PIT OF HELL 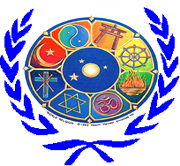 Here is in English the document Charta Oecumenica, which all the "churches" in Europe have signed:

Guidelines for the Growing Cooperation among the Churches in Europe

" Glory be to the Father, and to the Son,and to the Holy Spirit"

As the Conference of European Churches (CEC) and the Council of European Bishops' Conferences (CCEE)* we are, in the spirit of the Messages from the two European Ecumenical Assemblies of Basel (1989) and Graz (1997), firmly resolved to preserve and develop the fellowship that has grown up among us. We give thanks to the Triune God for guiding our steps towards an ever deeper fellowship through the Holy Spirit.

Various forms of ecumenical co-operation have already proved themselves. Christ's prayer is: "...that they may all be one. As you, Father, are in me and I am in you, may they also be in us, so that the world may believe that you have sent me" (John 17:21). If we are to be faithful to this prayer, we cannot be content with the present situation. Instead, aware of our guilt and ready to repent, we must strive to overcome the divisions still existing among us, so that together we may credibly proclaim the message of the Gospel among all people.

Listening together to God's word in Holy Scripture, challenged to confess our common faith and to act together in accordance with the perceived truth, let us bear witness to the love and hope which are for all people.

Europe - from the Atlantic to the Urals, from the North Cape to the Mediterranean - is today more pluralist in culture than ever before. With the Gospel, we want to stand up for the dignity of the human person created in God's image and, as churches together, contribute towards reconciling peoples and cultures.

In this spirit, we adopt this charter as a common commitment to dialogue and co-operation. It describes fundamental ecumenical responsibilities, from which follow a number of guidelines and commitments. It is designed to promote an ecumenical culture of dialogue and co-operation at all levels of church life, and to provide agreed criteria for this. However, it has no magisterial or dogmatic character, nor is it legally binding under church law. Its authority will derive from the voluntary commitments of the European churches and ecumenical organisations. Building on this basic text, they can formulate their own local addenda, designed to meet their own specific challenges and resulting commitments.

I. WE BELIEVE IN "ONE HOLY CATHOLIC AND APOSTOLIC CHURCH"

"(Make) every effort to maintain the unity of the Spirit in the bond of peace. There is one body and one Spirit, just as you were called to the one hope of your calling, one Lord, one faith, one baptism, one God and Father of all, who is above all and through all and in all" (Ephesians 4:3-6)

1. Called Together to Unity in Faith

With the Gospel of Jesus Christ, according to the witness of Holy Scripture and as expressed in the ecumenical Nicene-Constantinopolitan Creed of 381, we believe in the Triune God: the Father, Son and Holy Spirit. Because we here confess "one, holy, catholic and apostolic church" our paramount ecumenical task is to show forth this unity, which is always a gift of God.

Fundamental differences in faith are still barriers to visible unity. There are different views of the church and its oneness, of the sacraments and ministries. We must not be satisfied with this situation. Jesus Christ revealed to us on the cross his love and the mystery of reconciliation; as his followers, we intend to do our utmost to overcome the problems and obstacles that still divide the churches.

- in the power of the Holy Spirit, to work towards the visible unity of the Church of Jesus Christ in the one faith, expressed in the mutual recognition of baptism and in eucharistic fellowship, as well as in common witness and serviceII.

II. ON THE WAY TOWARDS THE VISIBLE FELLOWSHIP OF THE CHURCHES IN EUROPE

"By this everyone will know that you are my disciples, if you have love for one another" (John 13:35)

2. Proclaiming the Gospel together

The most important task of the churches in Europe is the common proclamation of the Gospel, in both word and deed, for the salvation of all. The widespread lack of corporate and individual orientation and falling away from Christian values challenge Christians to testify to their faith, particularly in response to the quest for meaning which is being pursued in so many forms. This witness will require increased dedication to Christian education (e.g. catechism classes) and pastoral care in local congregations, with a sharing of experiences in these fields. It is equally important for the whole people of God together to communicate the Gospel in the public domain, which also means responsible commitments to social and political issues.

- to discuss our plans for evangelisation with other churches, entering into agreements with them and thus avoiding harmful competition and the risk of fresh divisions;

- to recognise that every person can freely choose his or her religious and church affiliation as a matter of conscience, which means not inducing anyone to convert through moral pressure or material incentive, but also not hindering anyone from entering into conversion of his or her own free will.

3. Moving towards one another

In the spirit of the Gospel, we must reappraise together the history of the Christian churches, which has been marked by many beneficial experiences but also by schisms, hostilities and even armed conflicts. Human guilt, lack of love and the frequent abuse of faith and the church for political interests have severely damaged the credibility of the Christian witness.

Ecumenism therefore begins for Christians with the renewal of our hearts and the willingness to repent and change our ways. The ecumenical movement has already helped to spread reconciliation.

It is important to acknowledge the spiritual riches of the different Christian traditions, to learn from one another and so to receive these gifts. For the ecumenical movement to flourish it is particularly necessary to integrate the experiences and expectations of young people and actively encourage their participation.

All the members of "churches" here.

2 Cor. 6:14 Be ye not unequally yoked together with unbelievers: for what fellowship hath righteousness with unrighteousness? and what communion hath light with darkness?