COMMUNISM IS ALIVE AND WELL - YOUR FREEDOMS SET TO EXPIRE SOON

Communism is alive and well in education restructuring in America. The Reauthorization of the Elementary and Secondary Education Act (ESEA), due for Congressional Hearings in March 2015, is the last nail in America's coffin. This bill, the ESEA Re-authorization, will affect YOU – Every American taxpayer! Every American who owns private property!

The ESEA is proof positive that COMMUNISM IS NOT DEAD! As Mark Twain once said, "The reports of my death are greatly exaggerated." Similarly, any time you hear reports that Communism is dead, don't believe them!

Contact your U.S. Congressmen and Senators and ask them to arrange for Anita Hoge, representative of the average American and spokesperson for grassroots parents, to be included in whatever testimony is given before their respective education committees related to the Reauthorization of this dangerous legislation, ESEA.

Eliminating property taxes aligns with the ESEA Re-authorization for a student to go to any school they want, public or private, where the money "follows the child."This is President Obama's "Choice." This is Obama's "Equity Plan," to fund every student the same, whether you are in a wealthy school district, a poor school district, a charter school, or a private school, with Title I funds.

How much will the state get in taxes from your profit? What about inheritance? Taxes? [Read More]

Here is current information about the Re-authorization of the ESEA:

“Republican Sen. Lamar Alexander has made rewriting the law one of his priorities; he has scheduled a hearing on the testing mandate for later this month — on the same day President Barack Obama delivers his State of the Union. The House is also likely to move quickly. Rep. John Kline, chairman of the House Education and the Workforce Committee, said Thursday that he plans to have a bill on the House floor “before the end of March.”

According to Anita Hoge, this bill is inclusive and contains most of the agenda which was in both older bills, HR 5 and SB 1094. This ESEA bill includes Title I money that will follow the child; expansion of charter schools, federal "choice" for public and private schools, Response to Intervention, Positive Behavior Intervention and supports, specialized student support, are all of the mental health agenda. It continues the data collection through IES (Institute of Education Sciences) which is really the National Center for Education Statistics longitudinal data collection, plus puts FERPA into federal law.

A few days earlier, I published another alert by Anita Hoge, this one ominously titled "OBAMA TARGETS BABIES! Assessing the babies is Obama's agenda." This alert explains why "FAMILY" has had to be re-defined in ESEA. Infants and toddlers are going to be screened, assessed and databanked according to extraordinarily intrusive behavioral criteria. The teacher (caregiver) will be doing anecdotal screening and assessment in this "functional behavioral assessment," and collecting data on each baby. Things like tantrums, doesn't put their toys away, separation anxiety, crying, not wanting to take a nap, not playing with other children, not sharing, hitting another child... all these are considered to be mental health disorders. This is the birth to kindergarten mental health interventions for our babies. This is research for the early learning and the $1 billion that Obama is funding for daycare and preschool. This horrible fact is the demoralizing effects of 54 years of "deliberate" Marxist brainwashing in public education. 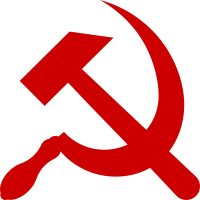 COMMUNISM: Originally the hammer and sickle represented a hammer and a plough -- the collective unity of Soviet workers and peasant farmers. It's interesting to see its resemblance to Islam's symbol (crescent/star). The two ideologies have had much in common: hatred for Biblical Christianity and Jews (remember the Russian pogroms), readiness to kill those who don't conform, hope of world conquest, etc.  källa/source

Jewish Bolshevism (also referred to as Jewish Communism) is a term used to present the fact that Bolshevism and Marxism were created by the Jews, the Bolshevik Revolution was funded by Jewish banking houses in New York City, the various coups in Europe were instigated by Jews and the system in general is designed explicitly to serve their interests. Many high profile figures such as Winston Churchill have known that Bolshevism is Jewish, some Jews have even confessed as much, however since World War II, free speech on the fact is highly stigmatised. Indeed part of World War II, Operation Barbarossa, was based on this knowledge. källa/source

Sweden is already programmed since long!

Revelation 3:9 Look, I will force those who belong to Satan's synagogue--those liars who say they are Jews but are not--to come and bow down at your feet. They will acknowledge that you are the ones I love.

Previous post: David Icke is a Witch - Repent before it is everlasting too late