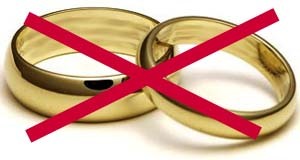 Divorce And Remarriage:
What Does the Bible Teach about Who May Divorce and Remarry?

Divorce and remarriage have become common as civil law allows no-fault divorce. A husband or wife may dissolve a marriage for almost any grounds and remarry, regardless of the will of their spouse. The result is that many people marry without considering the teaching of the Bible. Is fornication (or adultery) the only Scriptural grounds for divorce, or does the gospel allow marriage to be dissolved for other grounds? Please consider this careful study of the Biblical teaching.

Many forces in society defend the practice of easy divorce.

Divorce laws in America are so lax that almost anyone can dissolve a marriage and remarry at any time for any reason. With "no-fault" divorce, a husband or wife can claim "incompatibility" or "irreconcilable differences" and get a divorce no matter how much their spouse objects.

What is right or wrong is determined by the Creator of the Universe.

Part I: Does the Bible Say Divorce and Remarriage Is Moral or Immoral?

A. The General Teaching of the New Testament Is that Divorce is Contrary to God's Will, and that Remarriage Following Divorce Constitutes Adultery.

Note that there is one exception to this general rule, which we will discuss later. At this point we are discussing the general rule. The following passages present this teaching:

Jesus was asked whether divorce can properly be obtained for just any reason a person might have. He answered by appealing to the original marriage law.

Jesus taught that divorce itself, in general, is contrary to God's will. God made one man for one woman, indicating He did not intend for either to marry anyone else. He said they should cleave to one another and the two become one - there is no room in God's plan for a third party. God joins the man and woman, no human has the right to break that bond.

Further, whoever divorces his wife and marries again commits adultery (unless he does it because she has been guilty of fornication), and whoever marries her who has been divorced also commits adultery. (Mk. 10 adds that this rule also applies to the woman if she divorces her husband.)

To help understand the passage, read it with your name and your spouse's name, instead of "whosoever," etc.

The joy and peace Christians have is spiritual, being based on forgiveness, a right relation with God, and hope of eternal life. We do not have assurance of peaceful, joyous relations with other people in this life. Instead our earthly relations will often be difficult and trying.