Fidel Castro Was a CIA Agent 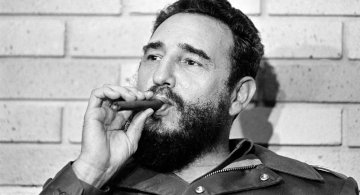 More evidence that Communism is a total sham. Its role is to
prevent genuine reform and impose tyranny in a feel-good disguise.

Fulgencio Batista, (Cuban President from 1953-59) was the Gaddafi of his day, creating a dangerous example of economic independence from the bankers.

The "revolutionary" Fidel Castro was nothing more than a banker shill tasked with removing him and reducing Cuba to penury and servitude, no different from any other US-installed fascist dictator.


Molecule: "The full story of Castro is even worse, but eventually it will come out. I'm actually already pushing the envelope -- the point is that Castro was on "the payroll" of Citibank and the CIA from the beginning."

Makow Comment: I'm not sure what Molecule's sources are but his account seems plausible. After all the CIA and Communism are both instruments of the central bankers. If Castro was indeed CIA, we will look at modern history in a new light. The Bay of Pigs invasion, for example, was meant to fail, in order to discredit JFK and make Castro look good. A real US invasion of Cuba would have been justified. Now I understand why it didn't happen.

Jim Perloff: "Note the absurdity: the U.S. spent billions and sent 500,000 troops around the world to Vietnam to "fight communism," yet it wouldn't lift one finger to fight communism in its own backyard." (See Comments)

Rockefeller's Citi-Bank provided the financial support that Fidel Castro needed for his ouster of Batista, and that Rockefeller had profited immensely from Castro's fictitious "expropriation" of Moa Bay mining fields.

Castro received his training in the arts of economic terrorism and guerrilla warfare from US Army Special Forces, Col. William A. Morgan of Ohio.

Rockefeller maintained actual physical control of all of "Castro's" oil and mining operations. Meanwhile he collected extravagant profits from endless "Pentagon bailouts" by the U.S. taxpayer.