Gandhi: Behind the Mask of Divinity 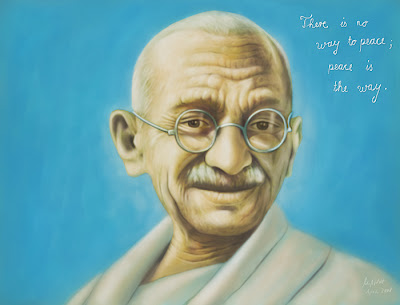 "Truth comes out breaking the walls of a fortress" is a Punjabi saying. For the lovers of truth G. B. Singh has exploded the Gandhi myth – apostle of peace, emancipator of untouchables and liberator of India by peaceful means from the British yoke – by publishing his labor of love, Gandhi: Behind the Mask of Divinity. G. B. Singh studied Gandhi for over twenty years collecting Gandhi’s speeches, writings and other documents, which the promoters of Gandhi left out intentionally to create a twentieth century messiah by fusing Jesus Christ and Vishnu.

The oppressors – the proponents of colonialism, slavery, racism and casteism - have imposed their own version of history on the victims through manipulation, deception and hypocrisy. For example there is holocaust museum in the capital of United States in the memory of six million Jews who fell victim to the atrocities of Nazis in World War II. It is commendable and such museums should be built in every capital in the world to remind people of the heinous crimes of the Nazis.

But why not a museum about the genocide of native Americans or a museum about slavery in the capital of United States? It takes moral courage to look into the face of truth! In order to avoid the obligation to intervene in Rwanda, the Western powers led by President Clinton put pressure on the United Nations Security Council not to characterize the mass murder of Tootsies as genocide.

The making of Gandhi myth stared in South Africa by white Christian clergy. Rev. Joseph J. Doke, a Baptist Minster was the first to write the biography of M. K. Gandhi. Soon many other European and American clergymen and writers rushed in to make their input. John H. Holmes, a Unitarian pastor from New York praised Gandhi in his writings and sermons with titles like: Gandhi: The Modern Christ, Mahatma Gandhi: The Greatest Man since Jesus Christ, Mahatma Ji: Reincarnation of Christ and Gandhi before Pilate. Romain Rolland, French Nobel Laureate in literature looked at Gandhi not only as a Hindu saint, but also another Christ.

Next post: The Liar and Freemason Dalai Lama and the Nobel Prize - Video