He says, "the scale of abuse of prisoners-of-war was contrary to the Geneva and other conventions to which Britain and its allies were signatories. As late as 1948, three years after the war’s end, the British Government’s treatment of its foreign prisoners was subject to International Red Cross scrutiny and international condemnation. The IRC threatened to bring the British government before international tribunals for abuse and illegal enslavement. Typically, British administered prisoner-of-war camps were worse than Belsen long after the war had ended and war disruption ceased. Tragically even civilians were illegally held, deported and murdered in the tens of thousands whilst the evil killers responsible have so far evaded justice.

The respected Associated Press Photographer, Henry Griffin who had taken the pictures of corpses in Buchenwald and Dachau when visiting Allied POW camps agreed: "The only difference I can see between these men and those corpses is that here they are still breathing." (1)

"According to revelations by members of the House of Commons, about 130,000 former German officers and men were held during the winter of 1945-46 in British camps in Belgium under conditions which British officers have described as 'not much better than Belsen." (2)

Adding to international outrage, Cyril Connolly, one of England’s most acclaimed writers reported: "British guards imprisoned German troops and tortured them." He described how "they were so possessed by propaganda about German 'Huns' that they obviously enjoyed demonstrating their atrocities to visiting journalists. A British reporter named Moorehead who was present at these ‘torture fests’ observed that 'a young British medical officer and a captain of engineers managed the Bergen-Belsen camp. "The captain was in the best of moods," he said. "When we approached the cells of gaoled guards, the sergeant lost his temper." The captain explained. 'This morning we had an interrogation. I'm afraid the prisoners don't look exactly nice.' 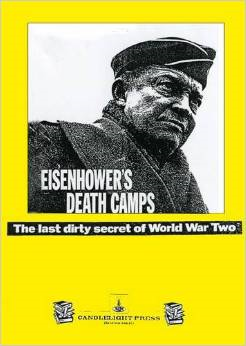 An 'Unknown Holocaust' and the Hijacking of History

An address by Mark Weber, director of the Institute for Historical Review, delivered at an IHR meeting in Orange County, California, on July 25, 2009. (A report on the meeting is posted here.)

We hear a lot about terrible crimes committed by Germans during World War II, but we hear very little about crimes committed against Germans. Germany’s defeat in May 1945, and the end of World War II in Europe, did not bring an end to death and suffering for the vanquished German people. Instead the victorious Allies ushered in a horrible new era of destruction, looting, starvation, rape, “ethnic cleansing,” and mass killing --one that Time magazine called “history’s most terrifying peace.” / 1

Even though this “unknown holocaust” is ignored in our motion pictures and classrooms, and by our political leaders, the facts are well established. Historians are in basic agreement about the scale of the human catastrophe, which has been laid out in a number of detailed books. For example, American historian and jurist Alfred de Zayas, along with other scholars, has established that in the years 1945 to 1950, more than 14 million Germans were expelled or forced to flee from large regions of eastern and central Europe, of whom more than two million were killed or otherwise lost their lives. / 2

Next post: John Hagee And His Deceptive Stand Concerning ISRAEL