Hell is a terrible actuality!

"And fear not them which kill the body, but are not able
to kill the soul: but rather fear him which is able to destroy both soul and body in hell."—Matt. 10:28.

"Here are some adjectives that describe the severe nature of Hell.

1.  "Everlasting Fire"   I am not going to split hairs to prove the fire of Hell is literal fire any more than I would split hairs to prove the gold of Heaven is literal god.  I believe when God says "fire," He means "fire."  When He says "gold" he means " gold."  Those who would deny the "fire" of Hell have only removed part the physical pain, which is the least significant feature of its character.  Hell is the madhouse of the universe where remorse and an accusing memory cause unspeakable torture. All words are incapable of describing that awful place.  The very thought of Hell ought to make one uncomfortable.  No music -but the weeping, wailing gnashing of teeth.  No rest -but the wicked wanting rest, yet forever tired.  No fragrance -"smoke of their torment ascendeth up forever."

2.  "Everlasting fire is a real PLACE."  The rich man of Luke 16 is in Hell bodily.  He wanted his brothers to know that where he was after death was a PLACE.  Jesus taught that the body would be in Hell along with the soul.  (Mat. 10:28)

3.  A place of TORMENT.  "The same shall drink of the wine of the wrath of God, which is poured out without mixture into the cup of his indignation; and he shall be tormented with fire and brimstone in the presence of the holy angels, and in the presence of the Lamb: And the smoke of their torment ascendeth up for ever and ever: and they have no rest day nor night, who worship the beast and his image, and whosoever receiveth the mark of his name."  Rev. 14:10-11

4.  A place of VILE COMPANIONSHIPS.  "But the fearful, and unbelieving and the abominable, and murderers, and whoremongers, and sorcerers, and idolaters, and all liars, shall have their part in the lake which burneth with fire and birmstone: which is the second death."  Rev. 21:8  The Devil will be there with all his demons.  Read the list of the wicked persons in Romans 1:29-31...

5.  A place from which there is NO EXIT.  In public halls we find in bold letters, "EXIT."  But "exit" is a word not in the vocabulary of Hell.  In other places there may be signs to help point the way out.  But there are no exit signs in Hell.  Jesus says "there is a great gulf fixed..."  It is impossible to escape from Hell to a better place.

6.  A place that is ETERNAL.  " And these shall go away into everlasting punishment: but the righteous into life eternal."  Matt. 25:46  No one has any trouble believing the "eternal life" part of this verse.  But by every known law of exegesis, it must mean the same thing in the other part of the verse.  This word means "unto the ages of the ages."  It is an unimaginable duration, a length of time that cannot be expressed.  Sometimes it is used to describe the duration of the blessings of the saints, other times it describes the suffering of those in Hell.  Eternal...  Without end....    There are 10,000 grains of wheat in one bushel, let us day.  Multiply that by all the grains in the millions of bushels of wheat grown every year.  Multiply that by all the leaves on all the trees of the world.  Now multiply that number by all the grains of sand on all the seashores of the globe.  Now take that number and multiply it by the number of stars in the sky.  The number you would get after making such a calculation, if you could, would not even begin to count the length of eternity.  Hell would not be Hell if it were just a 10-year sentence." 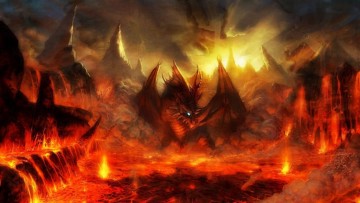 The term ”Hell” in Matthew 28:10 is a not a correct translation!
Why is that? Are there evil forces that have willfully led Bible readers into darkness?

"And fear not them which kill the body, but are not able
to kill the soul: but rather fear him which is able to destroy both soul and body in hell (Gehenna!)."—Matt. 10:28.

“Hell is the place of the future punishment called "Gehenna" or "Gehenna of fire". This was originally the valley of Hinnom, south of Jerusalem, where the filth and dead animals of the city were cast out and burned; a fit symbol of the wicked and their future destruction.“

The original Greek text is GEHENNA.
That is the eternal fire where Death, Sin and fallen angels/humans will be cast into for total destruction - AFTER JUDGMENT DAY!

Please use tools like Blue Letter Bible and look into the original Hebrew, Aramaic and Greek texts. As well as their meanings.

When reading Matthew 28:10, who warns us of destruction of both BODY & SOUL - any person grounded in the Bible - ought to understand that Jesus is referring to the Lake of Fire!

Many times I have informed you guys, who do a great job with your blog AlertSweden, about the question: does Hell exist?
My answer is no.
Hell as a place where God punish unrighteous people inside the the earth, with demons tormenting day and night, before Judgement Day - is not BIBLICAL verified.

The torment comes AFTER Judgement Day, at the SECOND Resurrection, where the unrighteousnes humans will face God and their Books of Life will be revealed to them.