How the Nephilim returned after the Flood - God´s Judgement ~ Video

Professing themselves to be wise, they became fools. Rom. 1:22

-These techniques make it possible to genetically engineer pigs and sheep that can't develop certain tissue and organs. Here's the idea: scientists would inject human stem cells into the embryos of such animals and allow the stem cells to grow into the missing organ, which would then be harvested.

-The 'chimeras' are created by injecting human stem cells into an animal embryo. These embryos are then implanted into a pig or a sheep.

The effort to incubate organs in farm animals is ethically charged because it involves adding human cells to animal embryos in ways that could blur the line between species.

-The worry is that the animals might turn out to be a little too human for comfort, say ending up with human reproductive cells, patches of people hair, or just higher intelligence. 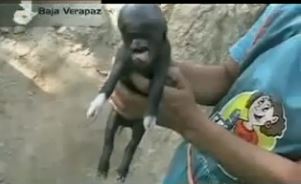 People who do not believe in a living God may become insane like these "scientists"!

"Now by that same word, the present heavens and earth have been reserved for fire and are being kept for the day when ungodly people will be judged and destroyed." 2 Peter 3:7

Next post: The Biblical Flat Earth: The Teaching From Scripture ~ Video