I DECLARE = WORD-FAITH PREACHERS ARE AGENTS OF SATAN

"It doesn’t matter how many people are “getting saved” in these churches, false doctrine makes false converts."

By John Downey of Writer’s Block 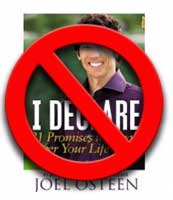 The words we speak set the course for our life. If you want to know what you’re going to be like in five years, listen to the words you are saying about yourself today. Now you can take charge of your future with the help of Joel Osteen’s latest book-I Declare. Filled with 31 written declarations-one for each day-you can declare, in faith, God’s powerful Word over your life and watch your surroundings change in incredible ways. You will move forward to a promising future from the fruit of your words! (Source)

This reminds me of another book I am reading by a somewhat lesser known Mega-Pastor John Hagee, his book is called The Power of the Prophetic Blessing, I was saving my comments about the lies of Word-Faith pastors till I did my book review but since it seems to be heresy hurricane season I will go ahead and tell you what the Bible says that is contrary to this heresy…and I’d like all other pastors that are in cahoots with these W-F heretics to take notice, it doesn’t matter how many people are “getting saved” in these churches, false doctrine makes false converts. As a pastor you should be protecting your sheep from these men, not giving them a platform to spew their lies and half-truths. And though I am referring specifically to Mark Driscoll, who has the nerve to call Joel Osteen a brother in Christ from the pulpit/stage on a Sunday morning and participate in a Google hangout with Steven Furtick to promote his new book, there are other pastors out there that will promote these lies. This is more than a lack of discernment on Driscoll’s part, Osteen and Furtick are both preaching a message contrary to the true gospel, and contrary to the Bible as a whole. In fact the Word of Faith heresy is the exact opposite of the life we are called to as Christians.

The prosperity gospel is a damnable lie, that makes mans comfort take precedence over Gods sovereign control. It makes God into a magical genie in a bottle only summoned when life gets hard. And it elevates the power of man’s words over that of God’s. It also makes faith something you do, when the Bible clearly says faith part of the gift of salvation. It’s basically a form of voodoo where God can be cajoled and coerced into action. Furthermore it never takes into account the fact that life in general is hard yes, but that the Christian life is especially hard…all of Jesus disciples except one (John who wrote Revelation) died as martyrs for their faith. Several passages in the Bible offer a stark contrast to the Word-Faith message…

But godliness with contentment is great gain, for we brought nothing into the world, and we cannot take anything out of the world. But if we have food and clothing, with these we will be content. But those who desire to be rich fall into temptation, into a snare, into many senseless and harmful desires that plunge people into ruin and destruction. For the love of money is a root of all kinds of evils. It is through this craving that some have wandered away from the faith and pierced themselves with many pangs. But as for you, O man of God, flee these things. Pursue righteousness, godliness, faith, love, steadfastness, gentleness.

The most famous "Word of Faith" preacher in Sweden is Ulf Ekman and many are those who follow him to Hell!

John 5:44 How can you believe, when you receive glory from one another and do not seek the glory that comes from the only God?

Next post: An 'Unknown Holocaust' and the Hijacking of History