“The more a social engineer can make his contact seem like business as usual, the more he allays suspicion. When people don’t have a reason to be suspicious, it’s easy for a social engineer to gain their trust. Once he’s got your trust, the drawbridge is lowered and the castle door thrown open so he can enter and take whatever information he wants” (Kevin D Mitnick).

“We don’t worship Satan, we worship ourselves using the metaphorical representation of the qualities of Satan. Satan is the name used by Judeo-Christians for that force of individuality and pride within us. But the force itself has been called by many names. We embrace Christian myths of Satan and Lucifer, along with Satanic renderings in Greek, Roman, Islamic, Sumerian, Syrian, Phrygian, Egyptian, Chinese, or Hindu mythologies, to name but a few. We are not limited to one deity, but encompass all the expressions of the accuser or the one who advocates free thought and rational alternatives by whatever name he is called in a particular time and land“ (Anton LaVey).

“I felt a culmination of that whole episode in my life many years later, shortly after The Satanic Bible came out. I met with Assaf Dayan, actor son of Israel’s legendary Defense Minister Moshe Dayan, and he was glowing about the book, agreed with every in it. He said it was exactly the philosophy they practiced, were forced to practice, in modern Israel” (Anton LaVey). 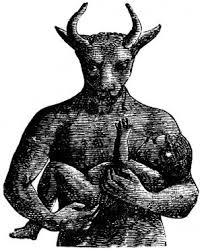 "There is scarcely an event in modern Europe that cannot be traced back to the Jews. We Jews today are nothing else but the world's seducers, it's destroyers, it's incendiaries, it's executioners." --The Jew Oscar Levy, in the preface to his book "The world significiance of the Russian revolution."

"The technotronic era involves the gradual appearance of a more controlled society. Such a society would be dominated by an elite, unrestrained by traditional values (of Liberty). Soon it will be possible to assert almost continuous surveillance over every citizen and maintain up-to-date complete files containing even the most personal information about the citizen. These files will be subject to instantaneous retrieval by the authorities." - Zbigniew Brzezinski ~ from his book, Between Two Ages

Son of Zbigniew Brzezinski Mark Brzezinski is (was until recently) US ambassador to Sweden!