Jews: The Pharisees of Today by Clement Pulaski

"O generation of vipers, who hath warned you to flee from the wrath to come? Bring forth therefore fruits meet for repentance: And think not to say within yourselves, We have Abraham to our father: for I say unto you, that God is able of these stones to raise up children unto Abraham."
Matthew 3:7-9

To determine the identity of the Pharisees of today, we turn to the history of the second century AD, when the victory of the Roman empire over the rebellious Jews resulted in the expulsion of the Jews from Palestine. The following information and quotes are drawn from a mainstream Jewish source, the Jewish Encyclopedia. These are not anti-Jewish views, but the views held by Jews themselves.

According to the Jewish Encyclopedia, the Pharisees gained prominence as a theological faction during the second Temple period. Their chief rivals were the Sadducees, who represented the Temple priests. Over the centuries, the teachings of the Pharisees gained more and more favor, and became dominant in Israel. The Pharisees were responsible for "[t]he very institution of the synagogue for common worship and instruction," which shifted focus away from the Temple as the sole site of worship. The Pharisees introduced changes in religious practice in several different areas, including the festivals, the keeping of the Sabbath, and legal decisions. By the time of Christ, the Pharisees were already a very large and influential group, who had gradually lessened the influence of the priestly Sadducees. It is no wonder then that the Pharisaic teachings became even more powerful when the Temple was destroyed and the Jews were scattered:

with the destruction of the Temple the Sadducees disappeared altogether, leaving the regulation of all Jewish affairs in the hands of the Pharisees. Henceforth Jewish life was regulated by the teachings of the Pharisees; the whole history of Judaism was reconstructed from the Pharisaic point of view...A new chain of tradition supplanted the older, priestly tradition...Pharisaism shaped the character of Judaism and the life and thought of the Jew for all the future.

This "new chain of tradition" was the foundation of the rabbinic teaching of today, and the modern rabbis are the direct intellectual descendants of the Pharisees. Over time, the rabbis came to be seen as "the authoritative teachers of the Law...who are the appointed spiritual heads of the community." Given these facts, we are confident in saying that modern Judaism is Pharisaism, and that the Jews are the Pharisees of today.

Free E-Book: On the Jews and Their Lies 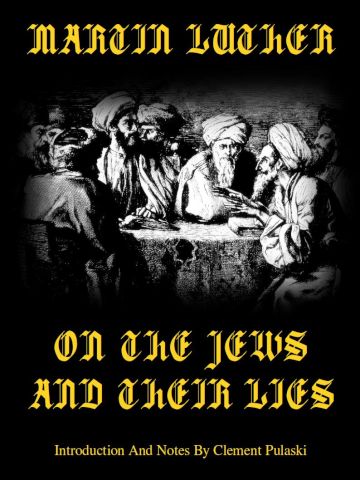 -The man who stood against the Pope that you might enjoy Christian liberty, saw the Jews as a grave threat, not just to our earthly prosperity, but to our eternal salvation.

To "Zionist-Christians" from God: 2 Chron. 19:2 - ". . . shouldest thou help the ungodly? and love them that hate the Lord; therefore is wrath upon thee from before the Lord."

Next post: Noahide Laws - Things you don´t hear from your pastor!