"By faith Noah, when warned about things not yet seen, in holy fear built an ark to save his family. By his faith he condemned the world and became heir of the righteousness that comes by faith." Hebrews 11:7

The ark is admitted by the apostle to have been a distinguished type of Christ.

"HE wiped out every living thing that was on the surface of the ground, from mankind to livestock, to creatures that crawl, to the birds of the sky, and they were wiped off the earth. Only Noah was left, and those who were with him in the ark!" Genesis 7:23

In that period before the flood, when the age of man was more than 900 years, the temptation to put death out of view was great. A Church there was—but by intermarrying with the wicked world it had become corrupt, and at last almost extinct. This was the first illustration of the fatal consequence of too close a connection between the Church and the world. By these means the Spirit of God was provoked to depart, and general licentiousness ensued. The Church became reduced to a single family, and the rest of the world sunk into infidelity and vice. "The LORD saw how great man's wickedness on the earth had become, and that every inclination of the thoughts of his heart was only evil all the time." Genesis 6:5

Thus the universal and complete effect of the fall was publicly ascertained. This done, God determined to cast away the world as ruined, and to make a new beginning on the foundation of grace, commencing a new stock in the family which included the whole church. This rejection of the world is expressed in the following strong eastern figure, "The LORD was grieved that he had made man on the earth, and his heart was filled with pain! So the LORD said, "I will wipe mankind, whom I have created, from the face of the earth—men and animals, and creatures that move along the ground, and birds of the air—for I am grieved that I have made them." Genesis 6:6-7

For a hundred and twenty years, "God waited patiently in the days of Noah while the ark was being built. In it only a few people, eight in all, were saved." The history leads us to suppose that the whole of this period was taken up in building the ark. In the infancy of the 'building arts' such a vessel must have cost immense labor, and it was so unpopular an undertaking, that few if any besides the family of Noah would be induced to engage in the the work. His sons were born about twenty years after the building commenced, and for a long time they could afford him no assistance. Cheered by the society and counsel of his venerable father and grandfather, he wore out the hundred and twenty years in patiently waiting for the fulfillment of the prediction. When the ark was finished, God brought all the creatures into it and shut Noah and his family inside.

The old world is devoted to destruction. The waters are to rise and rage above the highest mountains. No vessel had yet been invented to ride the waves. How can any escape? God only can find out the way. He causes an ark to be constructed, in which his friends find refuge, while the waves of wrath sweep away a wicked world. Who that turns his eye towards this frightful scene, is not reminded of that spiritual ark in which the friends of God are sheltered while the floods of vengeance sweep away an unbelieving world?

This prepares the way for us to meditate on the conduct of Noah while laboring for that refuge, and the conduct of that profligate generation who cast contempt on him. The things most worthy of notice in respect to Noah, are his faith, his obedience, his patience, his self-denial, and his fortitude. 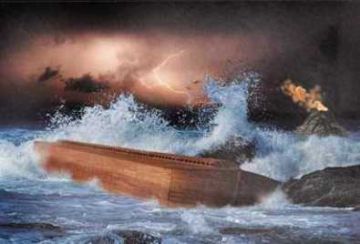