Pope Francis To Address USA Congress — The World is Changing

Shocking but true – Pope Francis will address the United States Congress in September 2015. This is the first time this has ever occurred in the history of the USA! Furthermore, he is speaking to Congress by way of an invitation! Saying he had “a bit of good news,” House Speaker John Boehner delivered first word of Francis’ speech at his weekly news conference Thursday. “We’re humbled that the Holy Father has accepted our invitation and certainly look forward to receiving his message on behalf of the American people,” Boehner, R-Ohio, told reporters. House Minority Leader Nancy Pelosi, D-Calif., said in a written statement that she looks forward to “hearing his call to live our values, to protect the poor and the needy, and to promote peace.” When he speaks to lawmakers, Francis will address a Congress that is 31 percent Catholic, well above the 22 percent of all Americans, according to a survey released last month by the nonpartisan Pew Research Center. Boehner and Pelosi are both Catholic.  ( http://www.wral.com/boehner-pope-francis-to-address-congress-on-sept-24/14424917/  )

The pope speaking to Congress is something brand new and perhaps the start of an even more malignant religious influence in the USA, than that which already exists! Time will tell.

Maybe while Pope Francis is visiting, Kenneth Copeland might have him over to address one of his crusades, as an extended token of blessing and unity with him.  Perhaps Kenneth Copeland will also share some wine with Pope Francis in a meeting somewhere, as he did before! Maybe Billy Graham, Jack Van Impe, Charles Colson, Rick Warren and hundreds of other religious leaders will throw a special private celebration for Pope Francis too. All of the non-Catholic examples of our day are all much less than admirable. The worst part is precious SOULS continue to be hurt by this false unity we are constantly exposed to! 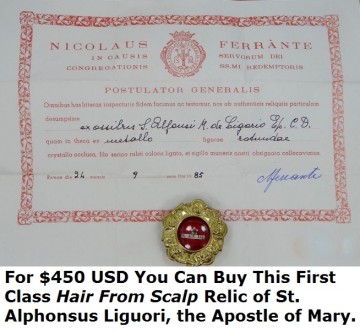 Part of Catholicism are their relics. Catholic relics are the physical remains (piece of bone, hair, etc.) of a so-called holy person, as a memorial and for veneration. There are different classes of Catholic relics, from first to third and they exist in different varieties.