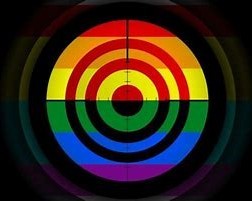 WHO IS NEXT IN THE CROSSHAIRS OF LGBT+ “CHRISTIANITY”?

Much attention has been brought to focus in the last two months on the July 26th Revoice Conference and yet few Southern Baptist and Presbyterian Church in America leaders have clearly denounced the bold claim of Revoice to “promote LGBT+ Flourishing in historic Christian tradition.” Dr Albert Mohler finally commented in The Briefing on Friday June 22nd but was very careful about his choice of words, asserting the best about Revoice participants.

“It’s very important to take the organizers at their word …. What’s most important at the onset to recognize is that those who’ve organized this conference are identifying as Christians who adhere to the historic Christian sexual ethic, and what’s also important is to understand that this places this conference in a very different place than others who are also talking about the LGBTQ issues. And some of those others are arguing for a reversal of the historic Christian biblical understanding of sexual morality and of sexual behavior.”

Dr. Mohler DOES NOT MENTION that Nate Collins, the founder and president of Revoice, spent 14 years at Mohler’s Southern Baptist Theological Seminary, has two degrees, a full academic specialty on gender and related topics, and has presented his writings as an SBTS Scholar. Mohler DOES NOT MENTION the Revoice ideology is based on Dr. Mark Yarhouse, an APA-affiliated psychologist who heads the Institute for the Study of Sexual Identity and was commissioned by The Gospel Coalition to develop the White Paper to be used by Seminaries, Christian universities and campus ministries like RUF, CRU, and InterVarsity, which has now come full bloom in July’s Revoice “LGBT+ and Queer Christian “Conference. Ignoring these realities as he has, will Dr. Mohler ALSO IGNORE that his disciple is taking the Revoice message to TEENS in our churches to CULTIVATE LGBT+ identity via the Youth Pastors?

Now it the time for all Evangelical Leaders like Dr. Albert Mohler of Southern Baptist Theological Seminary, Russell Moore of the Ethics and Religious Liberties Commission, and The Gospel Coalition co-founders, Tim Keller and D. A. Carson, to step forward and denounce Revoice and this surge mainstreaming LGBT+ Christianity. There is NO OTHER OPTION if they plan on having any remaining credibility whatsoever. The movement behind this radical effort to normalize LGBT+ in the church is in full step with the tactics and goals of Human Rights Campaign and Planned Parenthood.

These secular entities have not forgotten the Church and the need to subdue it — to seduce it and DESTROY THE CHURCH. HRC and PP love to bypass parents and family and promote their LGBT+ inclusion agenda directly to youth at ANY AGE as a HUMAN RIGHT. HRC LOVES to capitalize on the conflicted emotions of people and their faith, of people and their gay family – parents and children.

Is the Church about to be led to do the same?

Is this IDEOLOGY not out to target TEENS with the total LGBT+ package because next STOP on the Revoice founder and worship leaders’ TOUR is RECRUITING the YOUTH MINISTERS who can and will bypass parents, senior staff members at churches and embolden those students who have sympathies toward the cultural popularization of “it’s hip to be LGBT+”? Trans is the new PUNK for awkward teens seeking attention and to be an ally of LGBT+ friends is GLSEN’s dream for the Gay /Straight Allies movement. Now the effort is to bring it HOME to the HOUSES of Worship.

SAFE SPACES AND INCLUSION FOR OUR CHILDREN IN OUR OWN CHURCHES.

In October 2018 two of the key leaders of the Revoice Conference, Nate Collins (SBTS) and Gregory Coles (endorsed by The Gospel Coalition’s D. A. Carson and many others) will be speaking in Cincinnati Ohio at the DEVOTED FOR YOUTH PASTORS Conference along with a ministry titled LOVEboldly. Collins is on the Board of LOVEboldly Inc. which carries endorsements from Emergent heretic, Brian McLaren, who in 2012 presided over a Same Sex marriage of his son Trevor and is considered one of the leading figures in the train wreck of postmodernism infiltration into mainstream Christianity. (More on McLaren later)

Denominations and Churches have been led astray.

They are now followers of Satan.

It is the same all over the World.

JESUS IS COMING SOON! ARE YOU READY?

NO HOMOSEXUAL WILL ENTER HEAVEN!