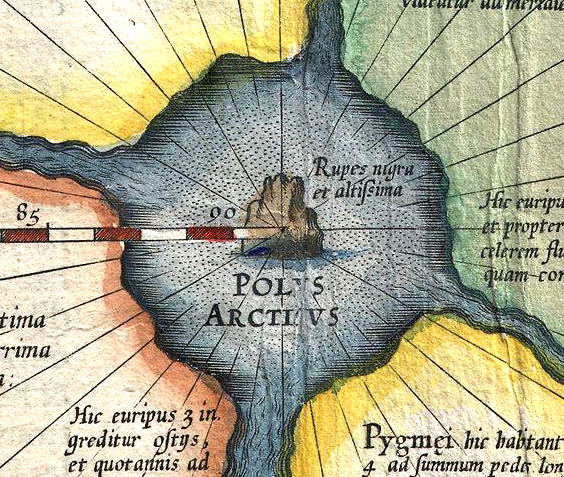 - Detail from Mercator's map of the Arctic (ca 1620 edition), showing the Rupes Nigra at the North Pole, surrounded by four large islands.

In the midst of the four countries is a Whirl-pool, into which there empty these four indrawing Seas which divide the North. And the water rushes round and descends into the Earth just as if one were pouring it through a filter funnel. It is four degrees wide on every side of the Pole, that is to say eight degrees altogether. Except that right under the Pole there lies a bare Rock in the midst of the Sea. Its circumference is almost 33 French miles, and it is all of magnetic Stone (...) This is word for word everything that I copied out of this author [Jacobus Cnoyen] years ago.[1]

This article is thanks to comments (The Biblical Flat Earth: The Teaching From Scripture ~ Video), which I got this morning from a brother in Christ who writes:

Also of a side note somewhat, if one looks at Google Maps or any other mapping program that uses USGS "satellite" information, you will see that the "North Pole" region from the top of Greenland north is either a grey bar or blurred out.

They've been caught doing similar mapping trickery at the "South Pole" as well.

Also, just like NASA is used to promote the glob(e) and would never reveal the truth of the flat earth so as to keep their lie going and to be able to continue to mock Bible believers, those who guard the "poles" have it in their best interest to keep Rupes Nigra a secret.

But He could have seen all the kingdoms of the world in a moment of time from Rupes Nigra which they hide the existence of.

I believe that the exceedingly high mountain that Jesus was taken up on is a mountain made of magnetite at the "North Pole" called Rupes Nigra. It is said to be 33 (strange?) miles in diamater and reached the clouds. Mt Everest is the tallest mountain that they say exists on earth but is it really? We know that the powers of the world guard the secrets of the so called north and south poles with guns and don't let anyone other than people working for them to go there. They don't want us to find the edge of the outside ring and they want to keep us away from the real highest mountain in the world is what I think.

Note that Rupes Nigra was shown on the Mercator map from the 1600's which was the Rand McNally atlas of its day.

Also, the peoples that live at the "North Pole" were heavily into the occult and originated from England according to what Inventio Fortunata states in the few fragments recovered.

Hi. I can see that most likely this is true about Mount Zion or the mountain of God being the exceedingly high mountain Jesus was taken to by the devil. It would be nice to go and find that mountain.

Perhaps you find something here? I have not seen or listen to the video myself.

Yes, that would be nice and very interesting!