Sanhedrin Mints Silver Half Shekel With Images of Trump and Cyrus

In gratitude to US President Donald Trump for recognizing Jerusalem as the capital of Jerusalem, the nascent Sanhedrin and the Mikdash (Temple) Educational Center are minting a replica of the silver half-shekel Biblically mandated to be donated by every Jewish male to the Temple.

The rich shall not give more, and the poor shall not give less, than the half shekel, when they give the offering of Hashem, to make atonement for your souls.” Exodus 30:15

Rabbi Hillel Weiss, Chairman of the Mikdash & Tsion Association that initiates the Temple reenactments and represents all the Temple movements, explained that the initial motivation for the putting the image of the US president on the coin was in gratitude for his support of Israel.

“Gratitude is an important and holy trait,” Rabbi Weiss, who is also spokesman of the nascent Sanhedrin, told Breaking Israel News. “He did a great and historical deed that the Jewish People are grateful for.”

An image of President Trump will be engraved alongside an image of the ancient Persian King Cyrus, who facilitated the building of the Second Temple that ended the Babylonian Exile in 538 BCE.

The elite (inclusive Trump) has had a plan for Jerusalem and the World - since the beginning of the Creation.

(The Flood is a reminder, who is in charge!)

That is to proclaim their god Satan as God.

They will put him on the throne in Jerusalem.

Antichrist (possessed by his master Satan) will be the man proclaming to be God, before he is completely defeated by Jesus Christ at his second coming!

Revelation 19:19-20 And I saw the beast, and the kings of the earth, and their armies, gathered together to make war against him that sat on the horse, and against his army.20 And the beast was taken, and with him the false prophet that wrought miracles before him, with which he deceived them that had received the mark of the beast, and them that worshipped his image. These both were cast alive into a lake of fire burning with brimstone. 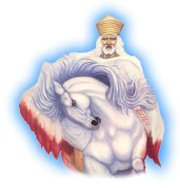 God hears his people - sermon (here it means the Jews)

Next post: God Hears His People Speaker & The LORD Shall Be King - sermon Dr. John Whitcomb