Just as the dark forces of the U.S. Central Intelligence Agency and George Soros’s multi-billion dollar network of non-governmental organizations plotted to destabilize the Middle East and North Africa through the use of social media to bring about the so-called “Arab Spring”, these same forces have opened a new chapter in their book of global dysfunctionality by facilitating the mass movement of refugees and economic migrants from the Middle East, Asia, and Africa to Europe.

In March 2011, Libyan leader Muammar Qaddafi predicted what would happen to Europe if the stability of his country was undermined by the Western powers. In an interview with “France 24”, Qaddafi correctly predicted, “There are millions of blacks who could come to the Mediterranean to cross to France and Italy, and Libya plays a role in security in the Mediterranean”.

Qaddafi’s son, Saif al Islam Qaddafi, who has been sentenced to death by the radical Libyan regime that governs Tripoli, echoed his father’s comments in the same interview with the French news network.

Saif said: “Libya may become the Somalia of North Africa, of the Mediterranean. You will see the pirates in Sicily, in Crete, in Lampedusa. You will see millions of illegal immigrants. The terror will be next door”. As seen with recent events, Saif was right on target.

Indeed, for Europe, the terror is literally next door. It is estimated that as many as 4000 radical jihadists, young men who are veterans of the terrorist holocausts of Syria, Iraq, and Yemen, have taken advantage of the absence of European Union external and internal Schengen border controls to either return to Europe or enter Europe for the first time. Many of the young male “migrants” have iPhones, bank ATM cards, multiple passports, and ample cash, hardly what would expect to be found in the possession of legitimate war refugees.

Not only have black Africans inundated southern Europe after making dangerous boat trips from North Africa, including Libya, but Syrian refugees, mostly created as the result of the West’s mass transfer of captured arms caches from Libya to Syrian jihadists after the overthrow of Qaddafi, thus triggering the bloody Syrian civil war, are streaming by boat and by land into the very heart of Europe. 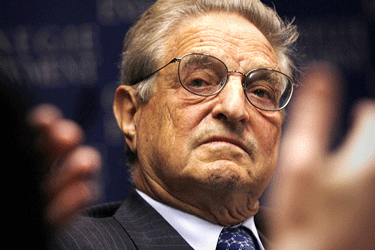 Soros, who is nothing more than a multi-billionaire front man for the even wealthier Rothschild banking family of Western Europe, oversaw the complete destruction of the nation-states of southeastern Europe that now permit practical unfettered access of civil war and economic migrants from Syria, Iraq, North Africa, sub-Saharan Africa, Afghanistan, Pakistan, Bangladesh, Burma, Sri Lanka, and other war- and poverty-ravaged nations of the Third World.

As a result of his programs to re-engineer nations, Soros first helped destroy the Socialist Federal Republic of Yugoslavia with the active help of the European Union and NATO. The seven independent republics that once constituted Yugoslavia, now serve as major transit routes for perhaps tens of thousands and an impending hundreds of thousands of non-European migrants. Greece, which is suffering under austerity “vulturism” directed by European central and private bankers, including Soros and his Rothschild overseers, can hardly deal with the massive influx of refugees. The bankers have ensured that Greece cannot even provide the basic social services for its own people let alone refugees from civil war zones and nations suffering from collapsed governments and economies.

Macedonia, which continues to reel from an attempted Ukraine-style “themed revolution” courtesy of neocons in the Obama administration like Assistant Secretary of State for European and Eurasian Affairs Victoria Nuland, was unable to hold back a mass invasion of refugees from Greece. Many of the refugees who treated the Greek-Macedonian border as a non-existent nuisance piled across it into Macedonia and onward into Serbia. The migrants have sought any way possible to reach welcoming Austria and Germany. Refugees in Budapest swamped the central train station, forcing it to close to all passengers, refugees trying to make it to Austria and Germany, as well as Hungarians and foreign tourists.

Muslim refugees arriving in Munich have been irritated by the presence on the streets of beer-drinking Germans and foreigners celebrating the annual “Oktoberfest.” There have already been heated exchanges on the streets between drunken Oktoberfest celebrants and some Muslim refugees who object to the presence of plentiful alcohol. Munich city officials said they only had the capacity to receive 1000 new refugees per day. The city has seen that number climb to 15,000 a day with some 90 percent of them failing to register with local authorities and disappearing into destinations unknown.

Throughout cities and towns in Europe, newly-arrived migrants sleeping in parks and on sidewalks have created a public health nightmare with human feces covering park grounds and the stench of urine permeating the walls of buildings and gutters. The situation is exacerbated by newly-arriving Syrian refugees in northern Germany mistaking poisonous wild “death cap” mushrooms for an edible variety that grows in the eastern Mediterranean. Although warning notices written in Arabic and Kurdish have been distributed to the refugees, the refugees have ingested the death cap mushrooms, which has resulted in uncontrollable vomiting and diarrhea, which has added to the public health dilemma facing Europe. It is only a matter of time before human waste-borne diseases like cholera and typhus make their first triumphant return to the cities of Europe since the deadly pandemics of the last millennium.

"The drive of the Rockefellers and their allies is to create a one-world government combining supercapitalism and Communism under the same tent, all under their control.... Do I mean conspiracy? Yes I do. I am convinced there is such a plot, international in scope, generations old in planning, and incredibly evil in intent."

Next post: The US Senate Wailing For Tammuz America & E Mail To the SEAT of Satan Sanhedrin