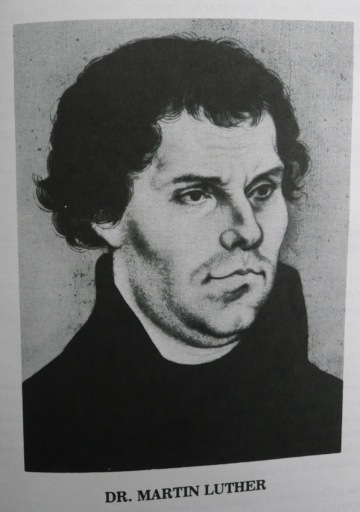 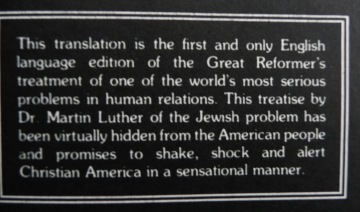 MARTIN LUTHER (1483-1546) was one of the greatest religious thinkers and reformers of all time. Founder of the Lutheran Church, his Protestant movement against the dominant Catholicism altered the course of European history. His fortitude in confronting and overcoming corruption within the Church hierarchy is legendary. He was a man of great intellect and unmatched moral courage.

But Luther had other opponents: the Jews. Judaism not only repudiated Christian theology by denying that Jesus was the true savior or Messiah, but it also took on an air of supreme arrogance-Jews as special, as different, as "chosen by God." As such, Jews are unwilling to repent, to accept Christ, or to see the true meaning of the Old Testament; hence they slander and insult Jesus, Mary, and indeed all Christians. Jews, said Luther, harbor an intense and deeply-rooted hatred for all non-Jews, and thus are willing to use, abuse, and exploit people for their own ends.

For Luther, Jews are arrogant and stubborn liars. They are greedy materialists, ever covetous of Christian wealth and power. They are congenital misanthropes, the master haters of humanity. And through their damnable usury-lending money at interest-they exploit, bankrupt, and enslave innocent people everywhere. Given the chance, said Luther, they would slaughter us all.

Hence his dramatic plan of action: destroy the synagogues, ban Judaic teaching, confiscate ill-gotten Jewish wealth, put Jews to hard labor, and ultimately, drive them out of Christian lands. Jews are incorrigible corrupters of humanity, and nothing less would get to the root of the problem.

On the Jews and Their Lies thus stands as one of the most remarkable books in history. Owing to its controversy, it is also one of the least-known. Now for the first time, the entire text is presented in English, in an authoritative fashion-complete with proper introduction, detailed footnotes, and helpful bibliography and index.

This is not just ancient history. Martin Luther's book is suffused with lessons for the present day. source

A WELL ORGANIZED PLOT EXISTS TO KEEP THIS BOOK HIDDEN.

Luke 21:20-23 "And when ye shall see Jerusalem compassed with armies, then know that the desolation thereof is nigh.

22 For these be the days of vengeance, that all things which are written may be fulfilled."

THEY BELIEVE THEIR RABBIS BUT NOT GOD!!!

And many of them who call themselves Christians believe more in the rabbis than in God. Terrible!! You see them in Sweden and abroad.

"They are all given over to wrath." Luther

I have read another edition (köpt på Bokbörsen) - but I think this is also true, and as I am a Christian and not a liar, I want to publish this one. I hope you are not afraid of the truth either?

MARIN LUTHER, THE JEWS AND THEIR LIES, EXPOSED, TRUTH