THE PROTOCOLS OF ZION

THE PROTOCOLS
OF THE LEARNED ELDERS
OF ZION
Visiting "The Protocols"

The author of this translation of the famous Protocols was himself a victim of the Revolution. He had lived for many years in Russia and was married to a Russian lady. Among his other activities in Russia he had been for a number of years a Russian Correspondent of the MORNING POST, a position which he occupied when the Revolution broke out, and his vivid descriptions of events in Russia will still be in the recollection of many of the readers of that Journal. Naturally he was singled out for the anger of the Soviet. On the day that Captain Cromie was murdered by Jews, Victor Marsden was arrested and thrown into the Peter-Paul Prison, expecting every day to have his name called out for execution. This, however, he escaped, and eventually he was allowed to return to England very much of a wreck in bodily health. However, he recovered under treatment and the devoted care of his wife and friends. One of the first things he undertook, as soon as he was able, was this translation of the Protocols. Mr. Marsden was eminently well qualified for the work. His intimate acquaintance with Russia, Russian life and the Russian language on the one hand, and his mastery of a terse literary English style on the other, placed him in a position of advantage which few others could claim. The consequence is that we have in his version an eminently readable work, and though the subject-matter is somewhat formless, Mr. Marsden's literary touch reveals the thread running through the twenty-four Protocols.

It may be said with truth that this work was carried out at the cost of Mr. Marsden's own life's blood. He told the writer of this Preface that he could not stand more than an hour at a time of his work on it in the British Museum, as the diabolical spirit of the matter which he was obliged to turn into English made him positively ill.

Mr. Marsden's connection with the MORNING POST was not severed by his return to England, and he was well enough to accept the post of special correspondent of that journal in the suite of H.R.H., the Prince of Wales on his Empire tour. From this he returned with the Prince, apparently in much better health, but within a few days of his landing he was taken suddenly ill, and died after a very brief illness.

May this work be his crowning monument! In it he has performed an immense service to the English-speaking world, and there can be little doubt that it will take its place in the first rank of the English versions of "THE PROTOCOLS of the Meetings of the LEARNED ELDERS OF ZION."

-Mr. Henry Ford, in an interview published in the New York WORLD, February 17th, 1921, put the case for Nilus tersely and convincingly thus:

"The only statement I care to make about the PROTOCOLS is that they fit in with what is going on. They are sixteen years old, and they have fitted the world situation up to this time. THEY FIT IT NOW." 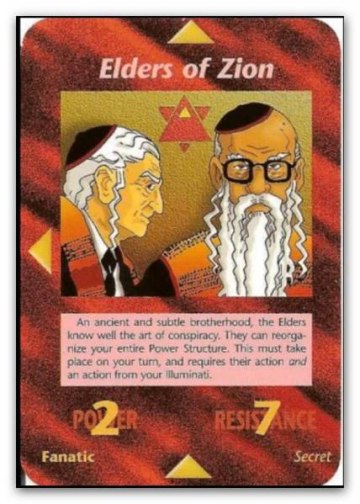 "By way of deception thou shalt do war."

[1] And I stood upon the sand of the sea, and saw a beast rise up out of the sea, having seven heads and ten horns, and upon his horns ten crowns, and upon his heads the name of blasphemy.
[2] And the beast which I saw was like unto a leopard, and his feet were as the feet of a bear, and his mouth as the mouth of a lion: and the dragon gave him his power, and his seat, and great authority.
[3] And I saw one of his heads as it were wounded to death; and his deadly wound was healed: and all the world wondered after the beast.
[4] And they worshipped the dragon which gave power unto the beast: and they worshipped the beast, saying, Who is like unto the beast? who is able to make war with him?
[5] And there was given unto him a mouth speaking great things and blasphemies; and power was given unto him to continue forty and two months.
[6] And he opened his mouth in blasphemy against God, to blaspheme his name, and his tabernacle, and them that dwell in heaven.
[7] And it was given unto him to make war with the saints, and to overcome them: and power was given him over all kindreds, and tongues, and nations.
[8] And all that dwell upon the earth shall worship him, whose names are not written in the book of life of the Lamb slain from the foundation of the world.
[9] If any man have an ear, let him hear.
[10] He that leadeth into captivity shall go into captivity: he that killeth with the sword must be killed with the sword. Here is the patience and the faith of the saints.
[11] And I beheld another beast coming up out of the earth; and he had two horns like a lamb, and he spake as a dragon.
[12] And he exerciseth all the power of the first beast before him, and causeth the earth and them which dwell therein to worship the first beast, whose deadly wound was healed.
[13] And he doeth great wonders, so that he maketh fire come down from heaven on the earth in the sight of men,
[14] And deceiveth them that dwell on the earth by the means of those miracles which he had power to do in the sight of the beast; saying to them that dwell on the earth, that they should make an image to the beast, which had the wound by a sword, and did live.
[15] And he had power to give life unto the image of the beast, that the image of the beast should both speak, and cause that as many as would not worship the image of the beast should be killed.
[16] And he causeth all, both small and great, rich and poor, free and bond, to receive a mark in their right hand, or in their foreheads:
[17] And that no man might buy or sell, save he that had the mark, or the name of the beast, or the number of his name.
[18] Here is wisdom. Let him that hath understanding count the number of the beast: for it is the number of a man; and his number is Six hundred threescore and six.

Next post: 70 YEARS The Secret History Of The Atomic Bomb by Eustace Mullins