THE "TORONTO BLESSING" AND KANSAS-CITY "PROPHETS" & THE MILLENNIUM 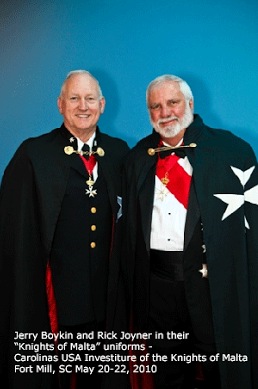 Rick Joyner is a Knight of Malta & here!

What about Ulf Ekman?!

As you can hear in the last video - the Knights of Malta is ecumenical.

Latter Rain threatens our tribulation endurance by attempting to convince us against the preparation of tribulation retreats on self-sufficient properties. Instead of making such preparations, Latter Rainists say that we will be wielding great faith sufficient to call our foods and other physical needs down from Heaven at the moment of need. As the influential Latter Rainist, Rick Joyner, has said:

By Gully!! Not only does Joyner teach that preparations are tantamount to a lack of faith, but he envisions the nations of the world feeding off of us in the tribulation period!!!!!! That is, he teaches that the tribulation period is going to be a party at our house, and that the world is going to be our guest!!!!!!!!!!!
And instead of viewing trib-preparation as wisdom...as those who see trouble ahead and wisely get ready for it...Joyner negatively paints post-tribulationists as stashers if they decide to store foods and other needs. Has he read his Bible, where it talks about the mark of the beast, and how the leading nations...yeah, even God Himself...won't permit us to buy our needs? God is calling us to get out of the nations in the tribulation, to prepare clean spiritual clothing while waiting patiently "behind closed doors" in wilderness locations, come blessing or persecution. And no one here is suggesting that true miracles (i.e. from God) will not be performed in those days, but not for the full-scale conversion of the nations. Consider the miracle-working powers of the Two Witnesses, and yet after 1260 days of it, they merely reap the wrath and mockery of the (unrepentant) nations!
The power of God through faith is available only with a work that God agrees with, of course. When we are moving in God, anything is possible through the tiniest quantity of our faith. But the "name-it-and-claim-it" methodology now being taught in charismatic circles is a building of bigger and bigger faith...and for what? For our own prosperity! This not only attempts to turn God into our personal genie, but it tends to make magicians out of us, especially when demons do in fact get involved posing as the Holy Spirit...fulfilling miracles and prophecies, and manifesting within with electrical/ecstatic experiences.
Why would God allow this to happen to believers? For one, "believers" includes the goats and the wolves...those not found in the Book of Life. And when it happens to the sheep, it's because the sheep have gotten off the True Way by making wrong deductions.
What better way is there for demons to instill their twisted ideas into Christianity but through evangelists endowed with "miraculous" powers? And if Irvingism was one of the first movements in modern times to exhibit such demonic miracles, then the pre-trib' doctrine that Irvingism foisted upon the world was also demonic. Surely, we realize that Satan's strategy in these last days will be to give the Elect no option but to receive the mark, and what better way to make that mark most-attractive than by having us stranded without food and shelter at the very outset of the tribulation?
Kingdom-Now theology is profoundly at odds with Christ himself defeating, and saving us from, end-time wickedness. Take a look at Psalm 18 to see that we, the Elect Body of Christ, are depicted in the throws of death on the last day, due to the great strength of the enemy, and that we are saved from that enemy only as a result of Christ's tempestuous appearance. And then remember what Jesus said: all flesh, including the Elect, would be annihilated at Armageddon if He didn't return at that critical point to cut short this present history (Matthew 24:22). That doesn't sound like the Elect will succeed in setting up a glorious Kingdom (i.e. the Millennium) prior to His return, does it?

The False Teachings of Rick Joyner

A man never reaches the spiritual height this side of our future glorification that he dare leave the constant dependency of Holy Scripture. We must weigh every experience by the clear truth of God's book. -Joseph R. Chambers

These videos are from the article above:

And this is what the so-called churches in Sweden and in
the world endorse!!