"According to Catholics, Lent is derived from the 40 days Yeshua spent fasting in the wilderness, but it is admitted that the observance of Lent was unknown to the disciples and it did not find its way into the church until several centuries after the time of the Messiah. Lent was an indispensible preliminary to the great annual festival in commemoration of the death and resurrection of Tammuz -- which was celebrated by alternate weeping and rejoicing. So the 40 days of Lent is connected with the Babylonian goddess Ashtoreth/ Astarte/Ishtar (the origin of the word Easter), and the worship of Tammuz."

Ezek 8:14 Then he brought me to the door of the gate of the LORD'S house which was toward the north; and, behold, there sat women weeping for Tammuz.

Ezek 8:15 Then said he unto me, Hast thou seen this, O son of man? turn thee yet again, and thou shalt see greater abominations than these.

2 Ki 23:5 And he [King Josiah] put down the idolatrous priests, whom the kings of Judah had ordained to burn incense in the high places in the cities of Judah, and in the places round about Jerusalem; them also that burned incense unto Baal, to the sun, and to the moon, and to the planets, and to all the host of heaven.

2 Ki 23:11 And he [King Josiah] took away the horses that the kings of Judah had given to the sun, at the entering in of the house of the LORD, by the chamber of Nathanmelech the chamberlain, which was in the suburbs, and burned the chariots of the sun with fire.

2 Ki 23:12 And the altars that were on the top of the upper chamber of Ahaz, which the kings of Judah had made, and the altars which Manasseh had made in the two courts of the house of the LORD, did the king beat down, and brake them down from thence, and cast the dust of them into the brook Kidron.

Baal, Tammuz, Ashtoreth, Astarte and Ishtar are all connected with pagan sun worship. Note that Lent is a moveable observance, connected to and preceding the festival of Easter. Easter is celebrated on a day specified only by the Roman Catholic Church, and not the Bible, and is fixed based on the sun and the Spring or Vernal equinox. 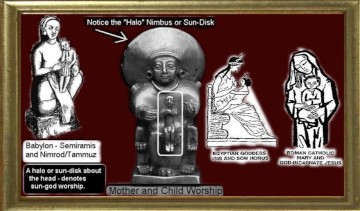