The Bible vs. Denominational Creeds:

Galatians 1:8,9 - If anyone, even an angel, preaches a gospel different from what inspired men taught, He is accursed of God.

Revelation 22:18,19 - Whoever adds to Jesus' words, God will add to him the plagues in the book. Whoever takes from God's words, his part will be removed from the holy city.

Every responsible person realizes that religious people are divided into various different groups. Those who claim to believe in Jesus have formed contradictory, disagreeing denominations.

People often wonder about the cause of this division.

One reason people are divided is that they follow different religious guides or standards of authority: creeds, creed books, church laws, etc. They use different ways to decide what they will believe and practice. When different religious guides disagree with one another, then the people who follow those creeds will necessarily disagree with one another. But, if all people would follow one and only one guide, this would be a major step toward unity.

The purpose of this lesson is to examine the human creeds of various denominations and compare them to the one truly undenominational guide, the Bible.

By a "creed" I refer to a source of authority which a group recognizes as a standard of guidance by which it determines church doctrine. Should we accept as authority in religion the various creeds, creed books, and church laws written by men according to their human wisdom, or should we follow the Divine wisdom revealed in Scripture?

In this study, we will document our statements by quoting from the creeds of various groups. Jesus and His apostles often examined the beliefs of various groups of their day. We will simply follow their example, but we do not seek to hurt anyone. Rather, we are concerned about souls. We seek to help people know truth and receive eternal life.

Notice how the Bible compares to other standards of authority in the following ways:

Every standard must be originated by someone. We here ask who is the originator of these various standards? What is their source?

A. The Bible Came from God.

Its origin is Divine. It is a message from God to man.

John 16:13; [14:26] - Jesus promised to send the Holy Spirit to guide the apostles into all truth. As these men spoke and wrote, the teachings they revealed were not human in origin, but were the very will of God.

1 Corinthians 14:37 - The things Paul wrote were the commandment of the Lord.

When we follow the Bible, we are following God's will for man, not human ideas.

B. Other Standards Came from Men.

They are human in origin. The writers were not inspired or guided by the Holy Spirit. Generally they do not even claim such. Nevertheless, denominations recognize these writings as authority - rule or law - which the group uses in determining what it should or should not teach and practice.

Traditionally United Methodists have not only been happy to be guided by the Discipline as a book of church law, but they have also usually regarded it with a certain degree of reverence... -- 1973 edition

Page 44 tells how this Constitution may be repealed or amended by 2/3 vote.

The United Presbyterian Church ... is guided by the Nicene and Apostles' Creeds from the time of the early church; the Scots Confession, the Heidelberg Catechism, and the Second Helvetic Confession from the era of the Reformation; the Westminster Confession and Shorter Catechism from the seventeenth century; and the Theological Declaration of Barmen from the twentieth century" - 1967 edition

Page 9: Do we get from the Bible alone all our knowledge and certainty about what God has told us? No, there is also Sacred Tradition ... What is tradition? The Word of God handed on to us by the Apostles in their preaching and by their successors in the Church to the present day...
Page 51: Did God intend that the Bible alone should be the guide to salvation? No, because certain things in the Bible can be misunderstood, and because the Bible does not have everything God taught.
Page 56 - Does Jesus require us to follow the Pope in matters of religion? Yes, because obedience and loyalty to the Pope are among the chief requirements of Our Lord's plan for unity in His church - A Catechism for Adults, 1975 edition.

Many other examples could be cited. Sometimes members of these groups will affirm that they do not recognize these writings as authority. Nevertheless, the denomination they are a member of does recognize and follow them. These are human standards in addition to the Bible. Men wrote them and men can change them.

What is God's attitude toward such human authority in religion? 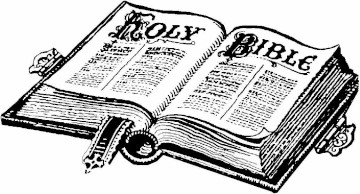 The purpose of this study is to consider just how serious a problem false teaching really is.

Surely we must agree that we should not condemn practices that harmonize with God's will. But the question is: Should we view false teaching as a serious threat, or should we tone down our opposition to it and seek unity based on compromise with those whose practices cannot be found in Scripture? Does the Bi­ble contain many warnings against false teaching, or is it a minor concern rarely mentioned?