The Finished Work of Jesus Christ

There are millions of people who follow the teachings of a man named C.I Scofield, and he is best known for the Scofield Bible which incorporated his notes right along with the scriptures from God’s Word. Many of those millions have so memorized Scofield’s teachings (just a man), that you would think they were the scriptures (God’s Word) themselves that they were quoting. William Cox was formerly numbered among those who were deceived by the Scofield Bible for many years, until he realized that it was complete heresy! C.I.Scofield (and his Bible) has led millions astray with his dispensational teachings concerning modern day Israel. Here is an example of how Scofield interprets the Bible:

In the book of Ezekiel chapter 43 we find the following verse:

And thou shalt give to the priests the Levites that be of the seed of Zadok, which approach unto me, to minister unto me, saith the Lord GOD, a young bullock for a SIN offering. (Ezekiel 43:19)

In his study notes for Ezekiel 43:19 the Scofield Bible declares the following.

Doubtless these offerings will be memorial, looking back to the cross, as the offerings under the old covenant were anticipatory, looking forward to the cross. In neither case have animal sacrifices power to put away sin. Heb 10:4, Rom 3:25

Mr Scofield believed in a future Jewish Temple that would be rebuilt, and he insisted that the sacrifices in that Temple would be memorial in nature. His teachings are shared by many of the “famous Christian ministries” of our day also. That interpretation by Mr Scofield has gotten over on millions in our time. That verse tells us that a young bullock (bull) would be sacrificed for a SIN offering, by priests, who were of the lineage of Zadok. A SIN offering was done for the purpose of expiating SIN. It was the BLOOD from those sacrifices that would atone for the sins of the people. Ezekiel never mentioned this sacrifice of a bullock as being memorial in nature at all. All of the sacrifices in the Old Covenant were shadows, or types, which pointed forward to the perfect and final sacrifice of Jesus Christ.

This type of teaching is a smack in the face to the finished perfect sacrifice of Jesus Christ on the cross! That is going backwards, and not forward! That is returning to the SHADOW after the REALITY (Jesus Christ) has come! Do not be fooled by Scofield (and his Bible), and similar teachings. Go back to the Bible and take Jesus at his word!

People need to know that there will never be another sacrifice which will satisfy the justice of Almighty God, outside the death of Jesus Christ on the cross. I have said it many times, and I will say it again. Preach the Gospel to the Jewish people EXACTLY the way that you preach it to the Gentiles, because there is absolutely no difference between those two groups in the sight of Almighty God.

Millions of Christians have their ears tickled by preachers who soft soap the Gospel, week after week, and refuse to warn their people about an eternal Hell.

“The next day John seeth Jesus coming unto him, and saith, Behold the Lamb of God, which TAKETH AWAY the SIN of the world.”  (John 1:29) 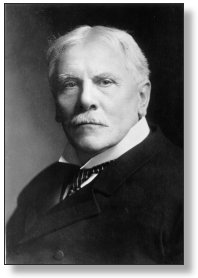 DO NOT BE FOOLED BY SATAN AND HIS PEOPLE!

The satanic Scofield “bible” has deceived many people about many things including the identity of last days Babylon.

It is the chief printed material from the 20th century responsible for distorting, destroying and deceiving people away from sound doctrine from the face of Christianity worldwide.