How Israel exploited the U.S. economy, government and military to destroy the American republic.

'One of the most important books of the last ten years' 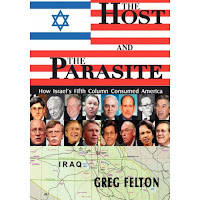 Author Greg Felton, "The United States became midwife to a war crime when it endorsed the creation of Israel in 1948 and blackmailed European nations into supporting it. From this time forward, the Zionist parasite began leaching off the U.S." According to Felton, "The September 11 attack was to the Zionist junta what the Reichstag fire was to the Nazis. It created the seminal moment of contrived paranoia that allowed the junta to pass the Orwellian USA PATRIOT Act, by which the U.S. became a de facto police state, a necessary step to put the junta above the law so that it could bastardize the constitution to serve the greater good of Israel. The demonization of Muslims is the key tactic that makes mass murder, torture and gross violations of civil liberties possible. Al Qa?ida is a myth concocted to manufacture a common enemy so that people would accept invasions of privacy and tolerate the mistreatment of Muslims." "A lucid and timely compilation of information and questions that should be the fodder of discussions in America and beyond. Readers will find this book a worthwhile acquisition even when they may not agree with everything stated." -Professor Mazin Qumsiyeh, Yale University "Greg Felton, an erudite journalist and historian, exposes the duplicity and hypocrisy of George W. Bush's 'war on terrorism.' His analysis of the alliance of neo-conservatism and Christian/Jewish Zionism is highly informative and well researched, a subject our media keep untold." -Ismail Zayid, President, Canada Palestine Association "The Host and The Parasite is a profound reading of today's world. It forcefully brings to the surface historical injustices; injustices that today's powers-to-be buried in the trash bin of history, along with the hopes and dreams of entire peoples." -Sam Bahour, Ramallah, Palestine

"The Host and the Parasite" is an extraordinarily important book that traces America's slide into fascism and subservience to a foreign power.

Felton argues persuasively that 3 groups have converged and come to dominate American policy for the benefit of Israel. Those 3 groups are: the neo-conservatives; the Republican evangelicals (Christian Zionists); and Jewish Zionists. He backs up his analysis with over 800 footnoted references to government, scholarly and media sources.

Felton refutes the traditional progressive view that Israel is merely a client state of America. If this is so, he asks, how has America come to pursue policies that are so utterly contrary to America's own national interest while being so highly beneficial to its junior partner?

Felton also refutes the theory that 'it's all about oil', arguing that the first Gulf War was the last American oil war and that the 2nd Gulf War ignored the interests of American oil companies, increased American oil costs and reduced American national security. How could this have happened? The 2nd war, he demonstrates, can only be adequately explained by the take-over of American foreign and domestic policy for the benefit of Israel.

Felton's book integrates a remarkable range of relevant material, including:

- the decline of American republican government from Viet Nam to the present;
- the rise of American fascism since the Reagan years;
- the rise of the pro-Israel lobby in America and its growing influence on the presidency from 1948 until now;
- the subjugation of America's Congress and Senate by the pro-Israel lobby;
- the anti-democratic philosophy of Leo Strauss and its corrosive influence on America via the neo-conservative movement;
- the growth and goals of the Project for a New American Century (PNAC) and other right wing think tanks;
- PNAC's search for a new 'Pearl Harbour' to permit the restructuring of America;
- The Israeli foreign policy goal of dismembering Iraq to ensure Israeli regional domination;
- the demonization of Islam;
- the origins and rise of the religious right in America and its obsession with Israel;
- the planned attack on Iran that is being pushed by Israel and its proxies in America;
- the extremely gloomy prospects for America to "return to normal".

Felton is generous in his praise of others who have explored some of this material such as John Mearsheimer, Stephen Walt, Jimmy Carter and Paul Findley. Felton's book, however, is a far more comprehensive study of the subject and integrates a much fuller range of issues and data to demonstrate the self-destructive nature of American policy in our time.

For those who imagine that America's Mid East policy is motivated by "love of justice and democracy", Felton reviews America's shameful and ongoing record of supporting dictators and overthrowing democratically elected 3rd world governments.

For those who pretend that America's Mid East policy is intended to serve America's self-interest, Felton reviews the appalling cost to America of its pro-Israel policy: thousands of dead American soldiers; trillions of dollars of debt incurred over the years due to higher oil costs and ruinous wars; the enmity of the world; and the destruction of the American system of republican government.

And what has America gained by supporting Israel? Nothing, Felton argues, that can begin to justify the appalling cost.

The book's cover (see above) makes it clear that 'Israel's 5th column' includes secular neo-con crooks like Rumsfeld and Cheney; Christian evangelical maniacs like Bush; and Jewish Zionist power players like Perle, Feith and Wolfowitz. Together, these people have torn up the American Constitution, dedicated America to endless war, bankrupted the country and endangered its security while cynically promoting the interests of a foreign power.

Greg Felton, an investigative reporter and author, spoke at the Vancouver Public Library on Feb. 25, 2008 about the influence the Zonist lobby has on the U.S. foreign policy.

Read more and watch the videos!

God  - please protect Greg Felton from being killed by your enemies by telling the truth!

Next post: Angels, Demons and Satan by Dan Corner