The Myth of a Judeo-Christian Tradition & Mystery Babylon: The Imposter ~ Video 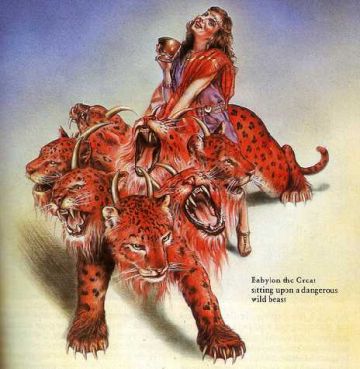 The following article from New Dawn Magazine No.23 Feb-March 1994.

This is an age in which news has been superseded by propaganda, and education by brain-washing and indoctrination. From the advertising used to sell poor quality goods, to the classes in schools designed to make children into conditioned robots of the State, the art of persuasion has displaced the simple virtue of truth.

Since the end of the Second World War we have been bombarded from all sides with references to the Western world's "Judeo-Christian religion," and "our Judeo-Christian heritage." We are told by both church leaders and scholars that our society is based on a supposed "Judeo-Christian tradition".

The notion of "Judeo-Christian religion" is an unquestioned -- almost sacrosanct -- part of both secular and church thinking. American Christian leader Prof. Franklin H. Littel, a vocal supporter of the Zionist state, frankly declared that "to be Christian is to be Jewish," and that consequently it was the duty of a Christian to put support for the "land of Israel" above all else. Pat Boon, the North American singer and evangelist, said there are two kinds of Judaism, one Orthodox and the other Christian.

Yet such a decidedly Christian Zionist outlook is to say the least, wildly simplistic and profoundly ahistorical. As the astute Jewish writer, Joshua J. Adler, points out, "The differences between Christianity and Judaism are much more than merely believing in whether the messiah already appeared or is still expected, as some like to say."

Back in 1992 both Newsweek magazine and the Israeli Jerusalem Post newspaper simultaneously printed extensive articles scrutinising the roots of the sacrosanct Judeo-Christian honeymoon!

The statement heading the Newsweek article read: "Politicians appeal to a Judeo-Christian tradition, but religious scholars say it no longer exists." The Jerusalem Post article's pull quote announced: "Antisemitism is a direct result of the Church's teachings, which Christians perhaps need to re-examine."

"For scholars of American religion," Newsweek states, "the idea of a single Judeo-Christian tradition is a made-in-America myth that many of them no longer regard as valid." It quotes eminent Talmudic scholar Jacob Neusner: "Theologically and historically, there is no such thing as the Judeo-Christian tradition. It's a secular myth favoured by people who are not really believers themselves."

"The Talmud is to this day the circulating heart's blood of the Jewish religion. Whatever laws, customs, or ceremonies we [Jews] observe -- whether we are Orthodox, Conservative, Reform or merely spasmodic sentimentalists -- we follow the Talmud. It is our common law." (A History of the Jews, Solomon Grayzel).

" Ye are of your father the devil, and the lusts of your father ye will do. He was a murderer from the beginning, and abode not in the truth, because there is no truth in him. When he speaketh a lie, he speaketh of his own: for he is a liar, and the father of it." John 8:44

"The primary aim of modern freemasonry is to build the New World Order, a spiritual Temple of Solomon, where non-members are nothing but slaves [and] ...where human beings would be sacrificed to Yahweh." (52)

Lina cites numerous Jewish sources that claim Freemasonry is based on Judaism and is "the executive political organ of the Jewish financial elite." (81-83)"

History shows that the synagogue of satan have been the true leaders of America ever since Adam Weishaupts illuminati took over freemasonry by stealth there. Meaning right from the beginning.

They then used men like Albert Pike to formulate their final solution for 3 world wars to bring in the new world order from what they themselves have referred to as the "New World" from the very beginning.

Pike was the first secular/satanist in modern times that mentioned recreating a modern Israel for the purpose of drawing the Muslims into the 3rd world war.

All these plans were made from their base mentioned in Zechariah 5. And the base is the real Mystery Babylon, not their counterfeit creation of modern Israel.

Jesus will return to Jerusalem to take his Fathers land back from the fake Jews and will reign there 1000 years during the millennium.

But Babylon will be a desolation without inhabitant forever according to Isaiah, Jeremiah and John. It is destroyed before Christ returns according to Revelation 17-19

Revelation 19:3 is the last that Babylon is mentioned and Christ returns in Revelation 19:11 to the Mount of Olives in Jerusalem which MUST still be intact for Him to reign from for 1000 years.

Many scriptures in the Old Testament show Jerusalem existing in the millennium LONG after Babylons smoke begins to rise forever in Revelation 19:3 before Christ returns.