The Secret History Of The Atomic Bomb by Eustace Mullins

The world was stunned to learn that India has now tested nuclear weapons. For many years, all nations have been concerned about the proliferation of atomic explosives. Even in their distress, no one seems to be interested in the historic or the psychological record of why these weapons were developed, and what special breed of mankind devoted themselves to this diabolical goal.

Despite the lack of public interest, the record is clear, and easily available to anyone who is interested. My interest in this subject, dormant for many years was suddenly rekindled during my annual lecture tour in Japan.

My hosts had taken me to the city of Nagasaki for the first time. Without telling me their plans, they entered the Nagasaki Atomic Bomb Museum. I thought it would be an interesting experience, but, to my surprise, when I walked into the exhibition rooms, I was suddenly overcome by sadness. Realizing that I was about to burst into tears, I moved away from my companions, and stood biting my lip.

Even so, it seemed impossible to control myself.

I was surrounded by the most gruesome objects, the fingers of a human hand fused with glass, a photograph of the shadow of a man on a brick wall; the man had been vaporized in the explosion.

When I returned to the United States, I knew I had to unearth the sinister figures behind greatest of human catastrophes. It took many weeks of research to uncover what turned out to be the most far-reaching conspiracy of all time, the program of a few dedicated revolutionaries to seize control of the entire world, by inventing the powerful weapon ever unveiled.

The story begins in Germany.

In the 1930s, Germany and Japan had a number of scientists icing on the development of nuclear fission. In both of these countries, their leaders sternly forbade them to continue their research. Adolf Hitler said he would never allow anyone in Germany to work on such an inhumane weapon.

The Emperor of Japan let his scientists know that he would never approve such a weapon. At that time the United States had no one working on nuclear fission. The disgruntled German scientists contacted friends in the United States, and were told that there was a possibility of government support for their work here.

As Don Beyer tells these immigrants to the United States pushed their program.

"Leo Szilard, together with his long time friends and fellow Hungarian physicists, Eugene Wigner and Edward Teller, agreed that the President must be warned; fission bomb technology was not so farfetched.

The Jewish émigrés, now living in America, had personal experience of fascism in Europe. In 1939, the three physicists enlisted the support of Albert Einstein, letter dated August 2 signed by Einstein was delivered by Alexander Sachs to Franklin D. Roosevelt at the White House on October 11, 39."

Also on display is a statement from General Eisenhower, who was then supreme Military Commander, which is found in number of books about Eisenhower, and which can be found on p.426, Eisenhower by Stephen E. Ambrose, Simon & Shuster, NY, 1983.

"Secretary of War Henry L. Stimson first told Eisenhower of the bomb's existence. Eisenhower was engulfed by 'a feeling of depression'. When Stimson said the United States proposed to use the bomb against Japan, Eisenhower voiced 'my grave misgivings,' first on the basis of my belief that Japan was already defeated and that dropping the bomb was completely unnecessary, and secondly because I thought that our country should avoid shocking world opinion by the use (of atomic weapons)."

Stimson was upset by Eisenhower's attitude 'almost angrily refuting the reasons I gave for my quick conclusion'. Three days later, Eisenhower flew to Berlin, where he met with Truman and his principal advisors.

Again Eisenhower recommended against using the bomb, and again was ignored.

Other books on Eisenhower state that he endangered his career by his protests against the bomb, which the conspirators in the highest level of the United States government had already sworn to use against Japan, regardless of any military developments.

Eisenhower could not have known that Stimson was a prominent member of Skull and Bones at Yale, the Brotherhood of Death, founded by the Russell Trust in 1848 as a bunch of the German Illuminati, or that they had played prominent roles in organizing wars and revolutions since that time.

Nor could he have known that President Truman had only had one job in his career, as a Masonic organizer for the State of Missouri, and that the lodges he built up later sent him to the United States Senate and then to the presidency.

The man who set all this in motion was Albert Einstein, who left Europe and came to the United States in October 1933. His wife said that he "regarded human beings with detestation". He had previously corresponded with Sigmund Freud about his projects of "peace" and "disarmament", although Freud later said he did not believe that Einstein ever accepted any of his theories.

Einstein had a personal interest in Freud's work because his son Eduard spent his life in mental institutions, undergoing both insulin therapy and electroshock treatment, none of which produced any change in his condition.

When Einstien arrived in the United States, he was feted as a famous scientist, and was invited to the White House by President and Mrs. Roosevelt. He was soon deeply involved with Eleanor Roosevelt in her many leftwing causes, in which Einstein heartily concurred.

Some of Einstein's biographers hail the modern era as "the Einstein Revolution" and "the Age of Einstein", possibly because he set in motion the program of nuclear fission in the United States. His letter to Roosevelt requesting that the government inaugurate an atomic bomb program was obviously stirred by his lifelong commitment to "peace and disarmament".

His actual commitment was to Zionism; Ronald W. Clark mentions in Einstein; His Life And Times, Avon, 1971, p.377,

"He would campaign with the Zionists for a Jewish homeland in Palestine."

"As a Jew I am from today a supporter of the Jewish Zionist efforts."

The atomic bomb program could not be launched without the necessary Wall Street sponsorship. Sachs, a Russian Jew, listed his profession as "economist" but was actually a bagman for the Rothschilds, who regularly delivered large sums of cash to Roosevelt in the White House. Sachs was an advisor to Eugene Meyer of the Lazard Freres International Banking House, and also with Lehman Brothers, another well known banker.

Sachs' delivery of the Einstein letter to the White House let Roosevelt know that the Rothschilds approved of the project and wished him to go full speed ahead.

Oppenheimer was beside himself at the spectacle.

"I am become Death, the Destroyer of worlds."

Indeed, this seemed to be the ultimate goal of the Manhattan Project, to destroy the world. There had been considerable fear among the scientists that the test explosion might indeed set off a chain reaction, which would destroy the entire world.

Oppenheimer's exultation came from his realization that now his people had attained the ultimate power, through which they could implement their five-thousand-year desire to rule the entire World.  (emph. mine) 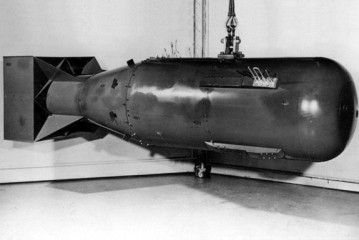 Hebrews 4:13 Nothing in all creation is hidden from God's sight. Everything is uncovered and laid bare before the eyes of him to whom we must give account.