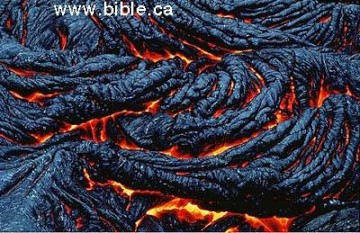 "Depart from Me, you who are cursed — into the eternal fire prepared for the devil and his angels!" Matthew 25:41

Those in the infernal dungeon of Hell, will undergo a VARIETY of torments. Those who are most afflicted upon earth, have seldom any more than one malady at a time. But should they have the plague, the gout, the stone, and fever all at one time — how miserable would they think themselves! Yet all that is but like the biting of a flea — compared to those intolerable, pungent pains which those in Hell endure! There, they have all the loathed variety of Hell to grapple with: the unquenchable fire to burn them; a lake of burning brimstone ever choking them; eternal chains to bind them; utter darkness to affright them, and
a worm of conscience which gnaws upon them eternally! Any one of these is worse to bear — than all the torments which mankind ever felt on earth!

But the torments in Hell are also UNIVERSAL, afflicting each part of the body and soul — which renders what they suffer, most insufferable! In those illnesses which men are seized with on earth, though some parts are afflicted — other parts are free. But in Hell, each member of the soul and body is continually tormented: The eye is tormented with the sight of the devils, who appear in all the horrid and black shapes which sin can give them! The ear is tormented with the loud yellings and continual outcries of the damned. The nostrils are smothered with sulphurous flames.

The tongue is covered with burning blisters.

The the whole body is rolled in flames of liquid fire! The imagination is tormented with the thoughts of what a Heaven has been lost.

Another thing which makes the misery of Hell so dreadful, is the EXTREMITY of the torments. The fire which burns is so violent that all the water in the sea can never quench it! The pains suffered are so extreme, that it is impossible they should be known by any, but those who feel them!

Another part of Hell's misery is the CEASELESSNESS of the torments. As various, as universal, and as extremely violent as they are — they are continual, also. Nor have they the least rest from them. If there were any relaxation — it might be some allay. But what makes this condition so deplorable — is that there is no easing of the torments! "They will go away into eternal punishment!" Matthew 25:46

The COMPANY they have there, is another element of their misery. Tormenting devils and tormented souls are all the company! Dreadful shrieks and howlings, under the fierceness of pain, and fearful blasphemies, is all the conversation!

The PLACE in which they suffer is another thing which increases the sufferings. Hell is the epitome of all misery —
a prison,
a dungeon,
a bottomless pit,
a lake of fire and brimstone,
a furnace of fire which burns to eternity,
the blackness of darkness forever!

The cruelty of our TORMENTORS is another thing which adds to the torments. The tormentors are devils, in whom there is no pity. Being tormented themselves, they take pleasure in tormenting others.

But that which makes these sufferings most grievous — is that they shall ALWAYS be so — these most intolerable sufferings shall last to all eternity. 'Depart from Me, you who are cursed, into the eternal fire!" will perpetually sound in the ears of the damned! The miserable situation they are in, shall be forever!