Much has been written about the unchecked influx of migrants into Europe recently. As the EU promotes the warm, fuzzy, “inclusive” policies that are overwhelming countries with immigrants, some of those countries are bluntly starting to say, “no more.” At the same time, other countries seem to be quietly preparing for…something… without being quite so forthcoming about the event for which they are readying themselves. 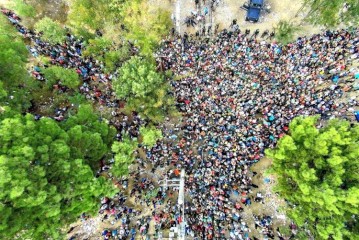 Millions of refugees and asylum seekers, primarily from Syria, Afghanistan, Iraq, Nigeria, Pakistan, and Somalia are flowing into Europe, largely unchecked. This is because of a welcoming “open door” policy promoted by German Chancellor Angela Merkel back in 2015. Despite the backlash from Europeans, Merkel says she has “no regrets.”

But some overwhelmed countries have decided that enough is enough. They cite the refugees’ refusal to assimilate, increasing crime statistics (particularly against women), and no-go zones in which the migrants have banded together and created areas in which Europeans are not welcome.

The European Union is so displeased about this that they’ve taken 3 of their member countries to court for refusing to “share the burden of hosting migrants.”

I’m not completely unsympathetic to the plight of those who want to leave countries in the Middle East and North Africa that have been bombed and droned beyond recognition. NATO has been “freeing” the heck out of them for decades, and as these viral photos show, there isn’t much left for people there. We have to accept the fact that interventionist foreign policies have had a large hand in creating this problem.

This being said, it’s lunacy to accept an influx of migrants who have no intention of assimilating into the culture of their host countries. It’s sheer madness to call it “racist” to prosecute immigrants for raping the women of your country due to cultural differences. It is the height of stupidity to allow outsiders to take over “zones” of your home country in which your police cannot maintain order.

And while Sweden hasn’t outright said they’re putting a stop to things, recent events make me wonder if that’s what is coming. The sad thing is, like the Trojan war, they’ve reached the crisis point at which they’re going to be forced to defend their countries from the inside.

"Barbara Lerner Spectre calls for destruction of Christian European ethnic societies. Barbara Lerner Spectre (born 1942) is an academic[1] and philosophy lecturer, who is the founding director of Paideia,[2] the European Institute for Jewish Studies in Sweden, a non-denominational academic institute established in 2001."

Babylon has caused this with her ungodly and unconstitutional wars in the Middle East.

And just as Nebuchadnezzar THOUGHT he was the one in control of his destiny so do arrogant people such as Soros, Spectre, Merkel and Macron..

God is in control and laughs at the arrogance of these godless fools.

And Babylon will be repaid for her warmongering.

Jeremiah 51:14 The Lord of hosts has sworn by Himself: "Surely I will fill you with men, as with locusts, And they shall lift up a shout against you."