Wayne Tyndale: “A Special Instrument Appointed by the Lord” – Strangled and Burn 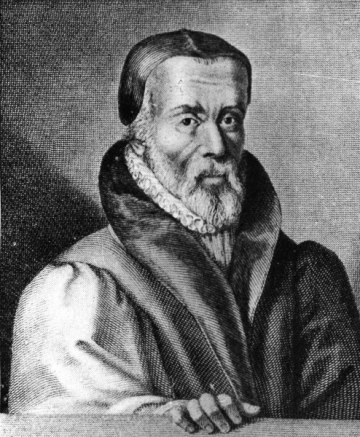 By John Foxe
(from Foxe’s Book of Martyrs)

William Tyndale was a special instrument appointed by the Lord as God’s pick-axe to shake the inward roots and foundation of the pope’s proud churchdom. The prince of darkness, with his impious imps, had a special malice against him, leaving no way unsought to craftily entrap him, falsely betray him, and maliciously spill his life.

He was born about the borders of Wales and brought up in the University of Oxford, where he, by long continuance, increased in the knowledge of languages and liberal arts. He especially applied himself to the knowledge of the Scriptures to which his mind was singularly addicted. There he privately read to certain students and fellows of Magdalen College, instructing them in the knowledge and truth of the Scriptures. His manners and conversation being correspondent to the same, were such that all that knew him reputed him to be a man of most virtuous disposition and of life unspotted.

Leaving the University of Oxford, Tyndale proceeded to the University of Cambridge until he had further ripened in the knowledge of God’s Word. Quitting his formal education, he resorted to one Master Welch, a knight of Gloucestershire, and was there schoolmaster to his children and in good favor with his master. As this gentleman frequently had guests at his table, there resorted to him many times sundry abbots, deans, archdeacons, doctors, and great beneficed men; who together with Master Tyndale sitting at the same table, did use many times to enter communication and talk of learned men, such as Luther and Erasmus; also of divers other controversies and questions upon the Scripture.

Then Master Tyndale, as he was learned and well practiced in God’s matters, spared not to show unto them simply and plainly his judgment, and when they at any time did vary from Tyndale in opinions, he would show them in the Book and lay plainly before them the open and manifest places of the Scriptures to confute their errors and confirm his sayings. And thus they continued for a certain season, reasoning and contending together at various times, until at length they waxed weary and bare a secret grudge in their hearts against him.

As this grew on, the priests of the country clustering together began to grudge and storm against Tyndale, railing against him in alehouses and other places, affirming that his sayings were heresy; and accused him secretly to the chancellor and others of the bishop’s officers.

Previous post: ONCE SAVED ALWAYS SAVED IS A LIE! ~ video

Next post: Do Catholics Possess Life Eternal? & Proof Pope Benedict is a Freemason