What Is the Jewish Belief About Moshiach (Messiah)?

The term “End of Days” is taken from Numbers 24:14. This has always been taken as a reference to the messianic era. Here we shall explore—albeit briefly—the Jewish belief in the coming of Moshiach (Messiah).

What does the word Moshiach mean?

Moshiach is the Hebrew word for “messiah.” The word messiah in English means a savior or a “hoped-for deliverer.” The word moshiach in Hebrew actually means “anointed.” In Biblical Hebrew, the title moshiach was bestowed on somebody who had attained a position of nobility and greatness. For example, the high priest is referred to as the kohen ha-moshiach.

In Talmudic literature the title Moshiach, or Melech HaMoshiach (the King Messiah), is reserved for the Jewish leader who will redeem Israel in the End of Days.

What is the belief in Moshiach?

One of the principles of Jewish faith enumerated by Maimonides is that one day there will arise a dynamic Jewish leader, a direct descendant of the Davidic dynasty, who will rebuild the Temple in Jerusalem, and gather Jews from all over the world and bring them back to the Land of Israel.

All the nations of the world will recognize Moshiach to be a world leader, and will accept his dominion. In the messianic era there will be world peace, no more wars nor famine, and, in general, a high standard of living.

What does the Bible (God) say (not Talmud or Kabbalah which are of Satan)?

Matthew 23:39 For I say unto you, Ye shall not see me henceforth, till ye shall say, Blessed is he that cometh in the name of the Lord.

Zephaniah 3:12-13 I will also leave in the midst of thee an afflicted and poor people, and they shall trust in the name of the Lord.13 The remnant of Israel shall not do iniquity, nor speak lies; neither shall a deceitful tongue be found in their mouth: for they shall feed and lie down, and none shall make them afraid.

Zechariah 8:13 And it shall come to pass, that as ye were a curse among the heathen, O house of Judah, and house of Israel; so will I save you, and ye shall be a blessing: fear not, but let your hands be strong. 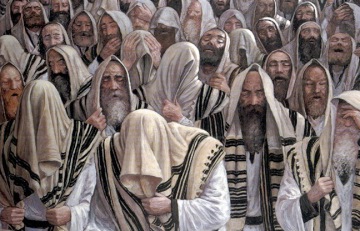 The Jews are waiting for a false messiah.

That "Messiah" is possessed by Satan!

You can read about him in Revelation 13 and 14!

MOST OF THE JEWS WILL BE DECEIVED.

THEREFOR THEY WILL PERISH AND DIE IN THEIR SIN!

Matthew 21:43 Therefore say I unto you, The kingdom of God shall be taken from you, and given to a nation bringing forth the fruits thereof. (is Spiritual Israel)

John Hagee, the Scofield Bible, and the Israel Delusion

--First of all I would like to address the issue of the numerous judgments in scripture. If any person reads their Bible and they listen to how the Lord Jesus Christ taught, they know that the Lord spoke with an urgency in His voice, encouraging the people to be prepared for his coming. When the Lord spoke about judgment, he always made a clear distinction between those who were saved, and those who were not.

--Let whomsoever say what they will, 'Israel and the land' is not the Christian message of the cross and the blood of Jesus. "Israel and the Land" is the Judaized misdirection of the gospel of Jesus Christ.

"He welcomes them to hell" - audio sermon