Who Shall Dwell with the Devouring Fire? by Horatius Bonar

There is a day coming when sinners shall be afraid, and when terrors shall overtake them as a flood. They are not afraid just now; they eat and drink and make merry, as if they had no eternity to prepare for, no danger to alarm them. But it shall soon be different. What is now far off, shall then be near — and sinners shall realize too late the horrors of that wrath from which they refused to flee. In the agonies of despair, when the flames are kindling round them, they will burst forth in such bitter outcries as these, "Who among us shall dwell with the devouring fire? Who among us shall dwell with everlasting burnings?"

Oh, that shriek of agony! Oh, that awful outcry of surprise and despair! Careless sinner! That cry shall soon be yours. These words shall soon be the very language in which your wretched soul shall give vent to its hopeless anguish when it sees itself shut in within the flaming walls, and feels damnation sure!

Oh, then, flee from the wrath to come! Make haste to escape from the devouring fire!

1. There is such a thing as devouring fire. It may appear a shadow now, but it shall soon be reality — and oh, what a reality! It is FIRE, the most torturing and excruciating of elements. It is devouring fire — not merely fire that can pain or scorch, but devour, swallow up the wretched sinner in its undying flame. His abode is a prison house of fire — a lake that burns with fire and brimstone (Rev. 19:20).

Hear how God Himself speaks of this, and learn that it is no mere dark imagination of cruel men to torment you before the time. "A fire is kindled in My anger, and shall burn unto the lowest Hell!" (Deuteronomy 32:22). "Upon the wicked He shall rain burning coals, fire and brimstone, and a burning tempest!" (Psalm 11:6). "You shall make them as a fiery oven in the time of Your anger, the Lord shall swallow them up in His anger wrath, and the fire shall devour them!" (Psalm 21:9). "Behold the name of the Lord comes from far, burning with His anger, and the grievousness of flame; His lips are full of indignation, and His tongue as a devouring fire!" (Isaiah 30:27).

Ah! Sinner, these are awful words, and they shall soon be realized in you — unless you turn and flee!

2. It is everlasting fire — burnings that shall never grow less intense or die away. They are kindled by God's own breath (Isaiah 30:33); and He who kindled them, alone can quench them. But this He will never do. They must burn on forever and forever. It is called "unquenchable fire," "everlasting fire," whose smoke goes up forever and ever! It shall be kept alive, fanned, increased, watched over — but it shall never go out nor abate! Nor shall there be anything to make it tolerable — not a drop of cold water to cool the sinner's scorching tongue. Long endurance shall never make it less tormenting or more easy to be borne. A vain dreamer of earth might say, "This horror will grow mild, this darkness light" — but it shall not be. There shall be nothing to mitigate it, or render it less intolerable throughout eternity.

3. It is prepared for the ungodly. It is said to have been at first prepared for the devil and his angels (Matthew 25:41), but it is also to be the abode of all who neglect the great salvation. It is for those who forget God (Psalm 9:17). It is for those who have refused to turn to the Lord, and slighted the blood of sprinkling. Shut out of Heaven — and shut into Hell — this is their doom! They turned away from God — and now He turns away from them! They rejected His love — and now His wrath comes on them to the uttermost. They obeyed the devil on earth — and now they are handed over to his company and his abode in Hell forever. They would not believe that God was holy, and did not care whether He was gracious; but now they are compelled to feel how holy He is, and at the same time to feel how He has forgotten to be gracious! For them, grace is past. They might have had it once, but they despised it — and now it is gone. It is all wrath and indignation now (Rev. 14:10).

4. They must dwell in it. They cannot flee. Escape is hopeless, for it is the Judge of all who pronounces the sentence, "Depart, you who are cursed, into everlasting fire!" The sinner may shrink — but he cannot flee. He may struggle — but it is all in vain. The command is given; angels hasten to see it executed, and devils seize him for their prey, and drag him along to his eternal abode! 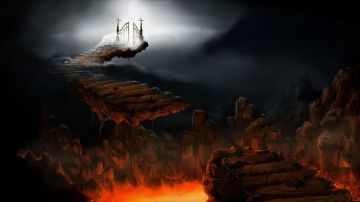 "It is everlasting fire — burnings that shall never grow less intense or die away.

They rejected His love — and now His wrath comes on them to the uttermost.

They obeyed the devil on earth — and now they are handed over to his company and his abode in Hell forever.

You profess to be Christians — but have never been born again.

You do many things like God's people — you pray, read, hear, speak, observe ordinances, yet still one thing is lacking. You are not born again!

Why should wrath be your portion? It was the portion of Jesus once — that it might never be yours. The pains of Hell took hold on Him (Psalm 116:3) — that they might never take hold of you."

Babara is likely the “point woman” in Sweden but she gets her paycheck from George no doubt.

But being this is ALL pushed by Illuminati based in Babylon, they will be judged by God most harshly of all.

And that’s why He calls His people to “Come out” no fewer than 7 times throughout scripture.

And they are both fake Jews as I understand.
https://www.independent.co.uk/voices/george-soros-...

And although the invasion by illegal aliens is troubling and economically destructive to those living in Babylon, it is the judgment of God to be sure.

Jeremiah 51:14 The Lord of hosts has sworn by Himself: “Surely I will fill you with men, as with locusts, And they shall lift up a shout against you.”

And the loving and practicing lies continues...

The Open Border Activists Behind the Illegal Immigrant Caravans

Guest,
There are more who are behind this I think:
https://www.youtube.com/watch?v=85BKDj_1vVU

Previous post: Jesus You Are My Healer & I Heard the Voice of Jesus ~ Music/Video

Next post: I Heard The Voice Of Jesus Say - Hymn by Horatius Bonar, 1846